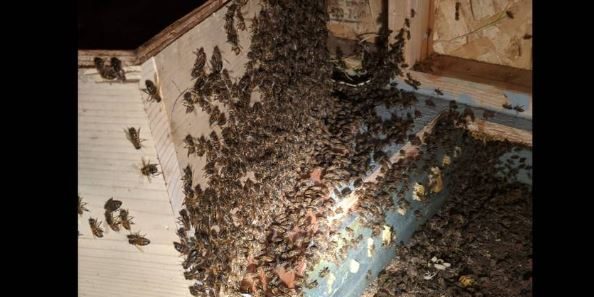 The stories about unknown hives are always fascinating and this one is a doozy. The latest tale of a massive hive living within a home comes out of California. Herb Herbert told the Sacramento Bee that he knew he had a bee infestation problem, he just never realized it was to the depths that he eventually discovered.

Herbert’s home is in El Cajon, California. This is located in San Diego County, about 15 minutes or so outside of San Diego proper. It is an area of California with some spectacular scenery and apparently, a place where bees like to hang out. About two years ago, Herbert started to notice some activity. Herbert has a shed in his backyard and there were an inordinate amount of honey bees buzzing around, but nothing he really thought that he needed to be overly concerned about.

Over time, the number of bees Herbert saw started to grow in number. Eventually, he plugged a hole where he had seen the bees coming from, however, the problem did not stop. It was when Herbert decided to throw a big party that he figured he better get a better solution for the bees to ensure his guests were not harmed.

Herbert decided to call the Bee Nice Wildlife Rescue. When they arrived and inspected the area, what they found was pretty amazing. Without knowing it, Herbert had accumulated a legitimate hive of more than 100,000 bees! The workers pulled back the flooring of the shed to reveal the full depth of the hive. When the full hive was uncovered, Herbert was staring at a massive, 70-pound hive right in his shed.

In all the time Herbert was aware of the bees using his shed as shelter, he stated that he had only been stung twice. So, it was only fair that he returned the favor and have them safely removed, which the Bee Nice rescue took care of for him. He is also quite aware of the current plight of the honey bee, stating, “The most important thing to us is that we were able to save them and not have to kill them. There were some recommendations to kill them, it’s easier. But there are issues with the bee population. To take out 150,000 wouldn’t be right.”

We are glad Herbert listened to reason and worked to save the bees rather than exterminate them and we are pretty sure the rescue will find a safe home for them. Enjoy your party, Mr. Herbert, and thanks for saving all those bees!