A Case of Honeybee Classical Conditioning 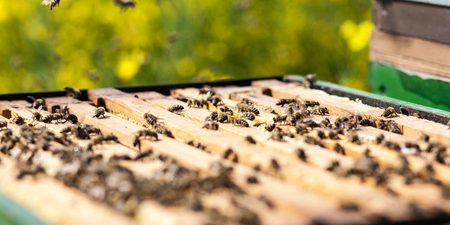 When people have headaches or feel sick, they tend to view the world differently to a degree, often developing what is called a “cognitive bias” in how they make decisions. In this instance, a person’s cognitive bias, defined as a systematic error in thought affecting the judgments and decisions people make, could lead them to believe that the outcomes of their decisions more likely to only punish them further. Amazingly, the same has been suggested in several studies about honeybees, which are among some of the more intelligent creatures in the wild, exhibiting a variety of skills that include both quick learning and decision-making.

In 2011, a study by four researchers showed that honeybees’ decisions became more pessimistic after they were shaken in a such way as to simulate a varroa mite attack. These bees had been taught to associate the reward of sugar water with a specific odor, but they also associated the punishment of poor-tasting water with a different odor—formic acid, which is a standard treatment against mites. Eventually, a third stimulus was made by mixing these two odors together. When it was introduced, the researchers saw the agitated honeybees were more likely to anticipate the punishment associated with the formic acid odor.

As predicted, the bees put their tongues away upon smelling the mixed odor whereas the non-shaken bees sucked down the sugar water without issue. Regarding how these responses should be judged, whenever bees’ antennae make contact with an appetizing stimulus, they involuntarily stick their proboscis (the insect equivalent of a tongue) out to get a taste. This involuntary response is called the proboscis extension reflex (PER), an ingrained, congenital behavior that results in them sucking the nectar from flower blossoms and regurgitating it for making honey.

This past year, behavioral biologist Lars Lewejohann along with several colleagues wanted to further test the effects varroa mite treatment could have on bee behavior alone—but without shaking the bees through a simulated mite attack. Lewejohann constructed a small testing apparatus for pumping various odors toward honeybees and judging their responses. This device allowed Lewejohann to restrain bees, tantalize their antennae using sucrose, and then pump stimulus odors at their faces after a piezoelectric buzzer and LED as cues. A fan behind the bees helped clear air within the device of previous scents—it also had a servo for swinging the tube in and out of the bees’ faces between tests.

Lewejohann’s team concluded that just the mite treatment doesn’t cause bees to begin making pessimistic decisions. This is very good news for beekeepers who are skeptical or even concerned about using formic acid against one of the honeybee’s worst predators. Just as with the effects of pesticides, malnutrition, and habitat loss, stress is a considerable factor when it comes to the decline of honeybee populations in the last decade, so this discovery not only leaves beekeepers rest assured they aren’t stressing their bees out, but they can continue to effectively treat their hives for varroa mites.