A Few Facts About Solitary Bees 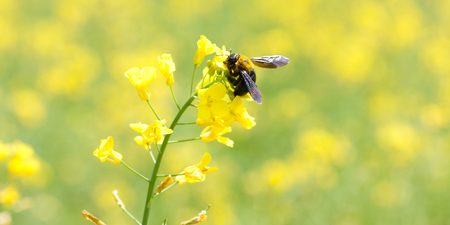 When most people imagine a typical bee, they likely picture the honey bee inside its hive or the bumblebee moving between flowers. However, there are also thousands of other bee species out there—some that are no bigger than a rice grain. While answering interview questions for the Science Friday Initiative recently, Shalene Jha, who is an associate integrative biology professor with Austin’s University of Texas, explained that these other bee species are just as important as pollinators, and they have more than a few quirks that most people have likely never heard of before.

Many Bee Species are Solitary

According to Jha, most bees either nest underground or in rotting tree stems or logs. “About 90 percent of all bees are actually solitary, so despite kind of the public impression that all bees are like honeybees and bumblebees, we have a lot of these bees that are living on their own,” she said.

Per Jha, “Bee bread is this mixture of honey and pollen and some other secretions that solitary bees create for their offspring. And they create this little ball of resources and then they’ll lay their eggs on top of this ball of food.” This bee bread provides food for newly-hatched solitary bees as well as helpful bacteria and fungi. “So, bees provide this care for their offspring in the form of this bread.”

Sweat Bees Get Nutrients from Other Animals

“Sweat bees” apparently got their nickname because people noticed them drinking humans’ perspiration as well as other animals’ fluids. “What we believe is going on is [these bees are] trying to get a limited resource,” Jha says. “Things like sodium and other micronutrients can be limited for these bees, so they need to get them somewhere—and tears or sweat are often good places.”

Carpenter bees, sometimes mistaken for bumblebees, are known to return to old nest areas and sort of “refurbish” these areas they were born in. “They have this…high level of fidelity to these woody materials in which they were born,” Jha said.

Recently, Jha and some colleagues conducted “paternity analyses” on the trees within about a 2.5-square-mile area in a forest in Panama, with Jha explaining, “We looked at the DNA in a seed to figure out where pollen was coming from…This allowed us to create kind of a little roadmap of where pollinators had been traveling before they landed on a receptive flower.” Their findings suggested that even the smallest of bees have large roles to play in pollination as well as promoting a forest’s genetic diversity.

These “small bees” managed to frequently spread pollen amongst trees that were over one mile apart from one another, which is roughly one “million times their size” when it comes to distance. “To put it in human context,” Jha explained, “it would be like traveling from Chicago to Los Angeles based on just the energy that you produced.”