A Storm Revealed a Tree Full of Honeybees 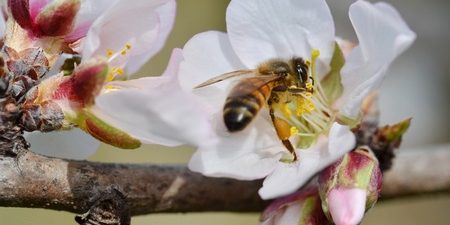 In Dover Township, Pennsylvania, the landlord of an apartment house, Susan Craver, made a strange discovery in the aftermath of a recent rain storm. This storm caused an old hemlock tree, which Craver’s father had planted about 50 years ago, to break off around 20 feet from the ground. Luckily, no one was hurt by the falling debris, but closer inspection revealed honeycombs inside a hollow around what was the middle of the tree, meaning that a beehive had set up shop there. After the storm, the bees no longer had a roof for their hive, exposing them to the elements and decreasing their likelihood of survival.

Fortunately for these honeybees, this old tree was on the property owned by Mrs. Craver, who lives in one of the apartments in the building she owns and serves as the landlord. She was quick to act once she knew the bees were there, spotting honeycomb right where the tree broke. The colony had apparently remained unnoticed due to how high it was in the tree. The hollow had plenty of room for the bees, but it was likely the hollow that led to the tree breaking in the midst of the storm.

Craver, who did not have experience in beekeeping, contacted local beekeeper Ron Gilbert using the Penn State Extension office. Upon inspecting the hive on a 20-ft tall ladder, Gilbert estimated between 60,000 to 70,000 honeybees were in the colony. Rather than have Gilbert attempt to extract the bees from the tree to raise himself, Craver informed him that she would rather keep the colony. Gilbert told her that it was probably for the best, given the extraction would likely only kill many bees and cause them much stress.

Craver just needed a method of preserving the hive since it still had no “roof” above it. Moving forward, Gilbert trimmed the top of the tree and secured a bee cover onto the trunk, which would allow the honeybees access to the hive but keep the elements out. A tenant on the third floor of Craver’s building actually told her about “a pizza box” at the top of the tree. “Mmm, that’s the roof for the bees,” Craver replied. Gilbert extracted honeycombs from the hive and ultimately got three or four pounds of honey, and Craver got three large jars of honey out of a comb that hit the ground in the rain storm.

This hemlock tree, according to Gilbert, is a lucky spot for the bees, considering the city lacks the insecticides farming calls for. Honeybees often travel up to five miles to pollinate in order to maintain their hives, but Craver is happy that her bees likely won’t have to go far. “I have two apple trees, a serviceberry tree, two peach trees, an apricot tree, a vegetable garden, compost pits, and now I have a bee hive…It’s so lovely living here—this little plot of earth.”