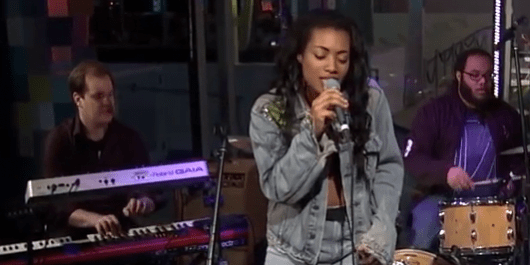 While it may take some time before a new town starts to feel like home for a lot of people, singer and actress Brittany Campbell seems to have no problem with it whatsoever. Originally from Brooklyn, Campbell, 28, came to Chicago in the fall of 2017, and she quickly discovered what it was about the city she could fall in love with and use to make the place home.

Campbell currently performs in the smash hit Hamilton, acting as an understudy for a Schuyler sister as well as appearing in the Spike Lee reboot She’s Gotta Have It, which airs on Netflix. The up and coming star’s R&B record, Stay Gold, also debuted on April 28 of this year. While speaking with a local Chicago magazine, Campbell opened up about the various things she enjoys about Chicago and life in general, which, much to her benefit, includes Manuka honey.

For Campbell, her so-called “fashion staple” includes a favorite brand of shoes, saying, “My Vegan Jadon II Dr. Martens. They’re 10 years old and literally have holes, but I won’t throw them out.” To emphasize the power of Doc Martens for Campbell, she has about 15 pairs. “It’s an issue,” she said.

In terms of a beauty regimen, Campbell tries to adhere to hers as much as she can. “I use Juice Beauty foundation and concealer,” she said. “For my curly hair, it’s argan oil and Cantu leave-in repair cream. After I wash my face at night, I use Rodin’s jasmine and neroli face oil.” As her star grows further, such attention to detail will likely come in handy when more cameras begin to take notice.

We did mention that Campbell loves Manuka honey, and she believes in it wholeheartedly. “When you’re feeling even the slightest bit of sickness, drink this and you’ll be cured,” she said, adding that she thinks “it has to be 15-plus factor to really work.”

One of Campbell’s favorite foods is unique specifically to her adopted home of Chicago—cinnamon rolls from the Chicago Diner. “A vegan friend told me about them. I was like, ‘There’s no way they’re better than a regular one.’ But they are! The recipe is online, so I’m not alone in my love.” Another hidden gem within Chicago’s city limits is Big Monster Toys, which Campbell describes as “a factory for gigantic toys. You feel like you’re in Oz.”

In one of those cases where the experience was just as important as the location, Campbell loves a place called Schubas, where she attended her first concert in Chicago in the spot’s basement. “It has a lot of parts, including this grungy, on-the-cusp-of-gross area with records on the wall.” Just another piece of the great city Campbell doesn’t plan on leaving anytime soon.

If all this talk about Manuka honey has you curious, we can get your order started right away! Click here to see our full line of Manuka honey products and remember, we cover the shipping for all orders of $150 or more!