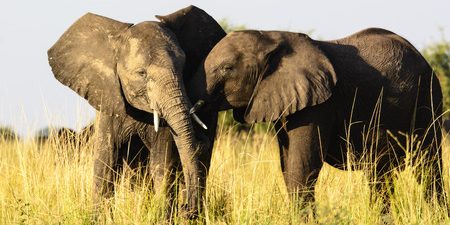 Due to population increases in many African countries, farmers are expanding their operations and resources to make up for the demand of new bodies. With that, however, comes farmers settling in the natural migration passages of African elephants, who have a tendency to respond to these fields of beans, peas, maize, and cassava in their way by trampling and eating the crops—endangering farmers’ livelihoods and even the magnanimous mammals’ lives, who have been poisoned or shot for their efforts. One environmentalist, Dr. Lucy King, has a solution for both parties:  African honeybees.

According to the Elephants and Bees Project (based in King’s doctoral research), elephants, the world’s largest land mammals, are very bee-averse. “Talking to local herdsmen and ranchers during my initial study up in northern Kenya,” King said. “I collated many anecdotal stories of elephants breaking open wild beehives as they foraged in Acacia trees and the bees coming out and stinging the elephant up the trunk, around the eyes, and in the mouth.” Further study showed elephants “will avoid live beehives at all costs.” King found 94 percent of elephants in her study moved away from bee noises within 80 seconds.

The way to use African honeybees for the purpose of keeping back elephants is to build a “beehive fence,” which by King’s words “is made up of interlinked beehives and ‘dummy’ beehives hung 10 meters (33 feet) apart and interlinked with a plain piece of fencing wire that, if disturbed, causes the whole fence to swing and release the bees.” Bees act as “natural electricity” on these fences and are a cost-effective solution compared to hot wire fences. Roughly 12 to 15 hives can surround 1.5 to 2 acres of farmland, with King reporting an 80 percent success rate.

“Elephants can identify bees by sound alone, indicating they may associate the sound with a negative historic event,” King said. As a result, “elephants emit a low frequency, infrasonic rumble in response to disturbed bees sounds that warns other elephants in the area to retreat…Once they learn there is an active beehive in a tree or on some posts around a farm, we suspect they remember that local threat and avoid it in the future.” This is a solution far more preferable to other frantic measures farmers previously used, such as firecrackers, dogs, spears, stones, and guns.

As well, beehive fences with healthy bee populations offer the added benefit of sometimes 50 percent more crops. As well, in 2015, King’s study site in Tsavo East National Park, Kenya produced up to 500 jars of honey, with the 2016 yield expected to be even higher. The study site is now being used for educating and training others to create beehive fences: “We are a very open source about our data, photos, manuals, and advice. Now, we are starting to see beehive fence projects pop up in over 11 countries, with more on their way.”