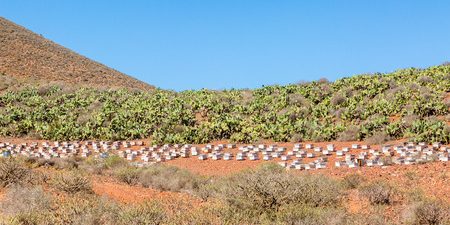 According to Cecil Wilson, who works as a beekeeper in Liberia, the alleged “killer” honeybees he works with make their honey just as good as other bees. These African bees, while certainly not one to trifle with, are providing substantial livings for many Liberians, who still struggle within a postwar economy. With Liberia ranked among the world’s poorest countries, many subsistence farmers within its borders have turned to beekeeping as a way of boosting income while also raising their crop yields via increased pollination. Additionally, the practice itself doesn’t actually require a lot of land, making it accessible to anyone who can acquire bees.

Today, Liberia has over 1,300 trained beekeepers whereas ten years ago, when the ancient practice of honey hunting was standard, there were just 50 trained beekeepers, leaving supermarkets to be stocked with imported honey. This shows on its own how much the domestic market has grown for local honey, and it was likely kickstarted thanks to Canadian couple Landis Wyatt and Kent Bubbs. Having come to Liberia in 2007 with the sole purpose of building schools, Wyatt stated, “The schools were lovely, but there was such a strong charity feel to it all. Giving people the ability to make money? That felt much more empowering.” Bubbs echoed this thought, realizing what the people wanted was jobs.

Deciding beekeeping would be “neat” to teach, Wyatt and Bubbs began contacting beekeepers, deciding to form a program that would help its trainees all the way to market. The program now comprises of an eight-day intensive course, which is then followed with a two-year period of monthly mentoring. In six years, veteran beekeepers from Nigeria, the U.K., the U.S., and Canada have provided their expertise, leading to a corps of Liberian master beekeepers.

Considering how much global bee populations have been declining out west, Liberia actually provides the optimum learning conditions for the trade. Single crop agriculture, which leads to poor nutrition and stress for bees, is rare in Liberia, and neonicotinoid pesticides, believed to negatively impact bees, are basically nonexistent. The process, according to Bubbs, is more natural, adding that, “It’s about letting the strong survive, allowing bees to be bees.”

As for the Liberian market, that is where Wilson’s role, having been trained in beekeeping, played its part. Wilson now runs and co-owns Liberia Pure Honey, an enterprise which guarantees fair prices and packages honey for supermarkets. In four years, this enterprise has grown into Liberia’s largest honey brand, with the profits invested back into training and infrastructure. Despite their aggression, many of Wilson’s apiaries contain African “killer” honeybees.

One apiary in particular is managed by Ethel Thompson, a friend of Wilson’s. While still coping with the trauma of witnessing her parents’ deaths by wartime rebel forces, Wilson proposed to Thompson the idea of beekeeping. Thompson had been selling fritters in Kakata, and the idea of being near hives scared her, but she went for it anyway. After three years, Thompson is now earning enough to care for her three kids and can even train beekeepers herself. “Beekeeping benefited me a lot because it made me do something for myself,” Thompson said. “I’m not afraid of them anymore.”