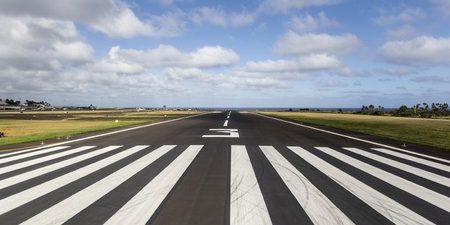 As many travelers have noticed, airports require miles of land to operate effectively and safely, but much of this land ends up being a few mile-long runways and many miles of fields untouched by cattle or other livestock, most wildlife, or crops—a lost opportunity some might say. However, there have been several airports in different parts of the world using their open, unused space for an eco-friendly, unconventional endeavor—hosting bee hives. For instance, the Hamburg Airport in Germany gained notoriety in 1999 for installing an apiary, leading to other German airports quickly following suit. Before long, the trend began spreading to other airports in cities across Europe and North America—from Copenhagen to Chicago.

Since 2016, Masuda, Japan’s Hagi-Iwami Airport has been home to Asia’s only airport bee hive. This airport’s honey project can only be described as a labor of love by Haruhiko Motohashi, who is the president of the Iwami Airport Terminal Building Company. Motohashi views this project as the perfect match for the Hagi-Iwami Airport because, as he puts it, “Large airplanes and tiny honeybees both have wings and fly. It’s an excellent combination.” While airport bee hives are still more novel than not, this airport is ideal for bees, being near the Takatsu River and an expansive prefectural park that offer a plentiful, diverse natural environment for them.

When the hive concept first appeared two years prior, Motohashi himself didn’t know much about beekeeping and gathering honey, but, fortunately, he’s had great support since starting. The project turned into a community effort, with Motohashi himself having a more hands-on part to play in tending the hives and several Masuda residents and airport employees making up his apiary team. In six months’ time, the honey project grew from a “why not?” idea into a fully-fledged operation, thanks in large part to Atsuo Tanaka, who founded the Ginza Honeybee Project, as well as Nina Jinsekikogen, an NPO who taught Motohashi and other project members about beekeeping.

The airport started setting hives up in April of 2016. By year’s end, the honey project had produced over 2,000 jars of honey, which all sold out in three months. The project’s surprising success encouraged Motohashi to obtain more hives, and the project’s second year produced double the first year’s amount of honey. Admittedly, the project’s initial goal was to bring attention to Masuda and inspire visitors to utilize the airport’s daily two round-trip flights out of Tokyo—and the community of Masuda is proud of what it’s grown into. Motohashi now wants to increase annual honey production to a 1-ton yield and register a trademark brand for the honey. He also hopes this project will keep benefitting the surrounding area environmentally and economically.