As Spring Looms, Another Possible Threat Against the Honey Bee Awaits 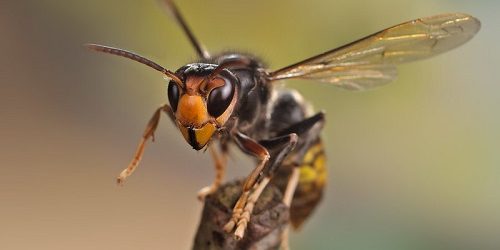 As the weather starts to warm up, honey bees start to spring back into action. In California, honey bees from across the country have been put to work in almond orchards for the season’s crop. Unfortunately, another insect has also awoken, the Asian giant hornet, which is bad news for our honey bee friends.

If you recall, last year, the Asian giant hornet had a presence in Vancouver. This is a natural predator of the honey bee and beekeepers are worried that if the hornet comes back again this year, it could kill off even more bees that we have seen in recent winters.

The first nest of these honey bee killers, as stated above, were located in Vancouver. The nest was destroyed, but there were also some hornets randomly spotted here in the United States. One hornet was found in White Rock and two more were found in Blaine (Washington state).

Not only are the hornets a threat to honey bees, but they will also attack humans if threatened. That being the case, if they are spotted, you are best served to call a professional in to handle them rather than risk aggravating the hornet and getting stung. These insects are super aggressive and the stings can be quite painful. Compared to other hornets, they are a bit larger and have large orange heads with black eyes. The Agricultural Ministry stated that if they are disturbed, they “will attack with painful stings, which can be hazardous to people’s health.”

Hopefully, the Asian giant hornet will not have a significant presence this year because honey bees have enough to worry about right now. Due to more pesticides in the market and some rather dangerous pesticides having been approved for domestic use, we are losing even more of these pollinators. The good news is that this winter has been relatively mild in most parts of the country, so we are hoping that when the numbers come in, we see less winter loss than what we have seen in years past.

The coronavirus has also presented a challenge. Because managed bees rely on their beekeepers to provide nourishment during the winter, quarantines have impacted the profession. In China, many beekeepers were worried about the fact they had not visited their hives in weeks. Last week, we reported that one Chinese beekeeper that had been permitted to go back to his hives had about a 10 percent loss, which was better than hoped. The good news here in the states, though, is that the quarantines are not as strict as they were in China, so our beekeepers should still be able to maintain their hives, even during this crisis.