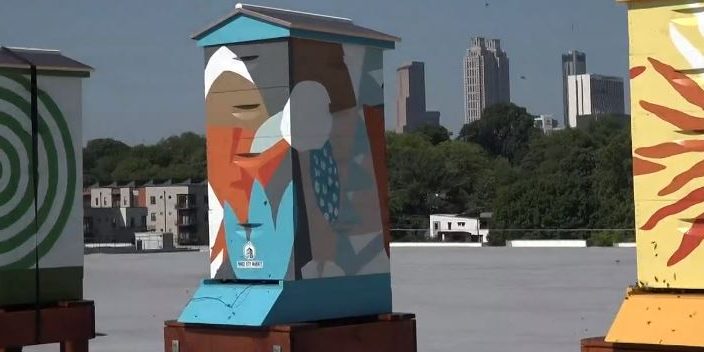 The city of Atlanta has done some pretty incredible things to promote honey bee wellness, and now the city is starting to get its just due. As part of a major project, “house hives” are starting to pop up all over the city. These colorfully painted hives are part of the Bee Downtown project that is getting some major backing from companies like Delta and AT&T.

Bee Downtown is a project to create hives throughout various cities to help the bee population, especially during the colder, winter months. Bee Downtown’s Leigh-Kathryn Bonner stated, “These hives are like little ‘Where’s Waldos’ all over around the town. You’ll find them at Piedmont Park. You’ll see them at the parking deck at Ponce. You’ll see these painted boxes popping up all over Atlanta.”

She further explained, “I wanted to help rebuild healthy honey bee populations. Studies show that honey bees do thrive in urban environments. So, what we started doing is looking to corporations to join the ‘bee team’ and be part of the movement to bring sustainable agriculture back to cities and also to help one of the world’s most precious pollinators. They’re going to be pollinating over 18,000 acres within the surrounding communities of Ponce. These hives are in the heart of Atlanta, they are the newest part of the Atlanta skyline.”

So far, the group has been able to place hives in both Atlanta and North Carolina, and from what I have read online, there are numerous other cities considering joining this network or something similar to it. The group is also trying to expand itself into other areas to generate even more interest in its projects. For instance, the group will be running an event in Atlanta in January for human resources managers to incorporate hive behavior into teaching leadership skills.

Honestly, this is one of the more exciting initiatives we have seen simply because it is really trying to incorporate itself into the real world, which will hopefully expand the base of individuals that truly understand the plight of the honey bee. The more people that understand, the less likelihood of extreme measures being taken when these people run into a swarm or an unexpected hive.

To learn more about the Bee Downtown project, click here.