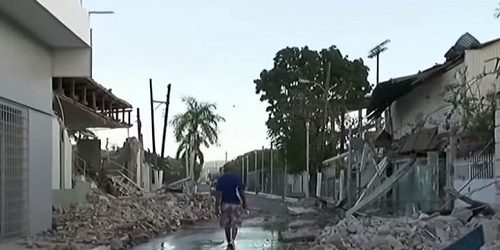 Earthquake-ravaged Puerto Rico has some other residents that are facing hardships right now. In addition to the obvious devastation throughout the island, Puerto Rico may now also be losing the bulk of its honey bee population. According to a recent NBC News report, honey bees are abandoning hives on the island due to the earthquakes that have plagued the area.

When Hurricane Maria hit in 2017, it wiped out virtually the entire bee population of Puerto Rico. Estimates were that roughly 85 percent of the native population had been killed off during the storms. In the two years since, the island has built its bee population up to roughly 60 percent of what it was prior to 2017, so the community was obviously still in subpar shape before these tremors and earthquake hit.

According to local beekeepers, many of their hives were damaged during the steady dose of tremors and the 6.4 earthquake that hit the island. The movement disrupted the usual activity of the bees, sending many of them away from the hive, creating mass confusion in these communities.

When some of the bees did return, they came back to hives that were either damaged or destroyed, causing even more confusion for the honey bees. A secondary problem the beekeepers are dealing with is the fact the normal feeding schedule for the bees has been thrown off. Clearly, many of these beekeepers are worried about their homes, so the bees have taken a backseat out of the sheer concern for safety.

Local beekeepers are turning to the government for help. In addition to the emergency relief resources being requested for residents, beekeepers are hoping for a little relief for their bees as well. The island is asking for “protein patties” to be donated to feed the honey bees and help save the hives. If these bees are not fed, they will leave, perhaps never to return. One local beekeeper stated, “Bees are looking for calmer areas, fleeing all the movement in the earthquake zone.”

It would behoove bee enthusiasts to help where they can, as Puerto Rico has been using a different breed of a honey bee than we typically see here in the United States. Rather than pollinate with the more common western honey bee, many of the beekeepers in Puerto Rico are using honey bees descendent from Africanized bees. With western bees being more susceptible to the Varroa mite and other parasites, this species of bee seems to be far more resilient.

Scientists: Honey Bees Need to Eat Healthier to Fight Off Threats
May 14, 2020

Japanese Honey Bees Figured Out How to Beat the Murder Hornet
May 9, 2020