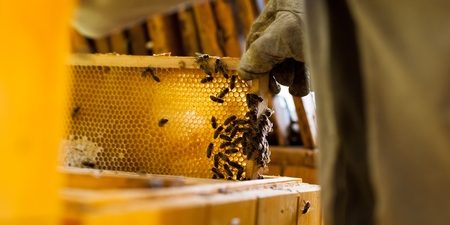 With winter quickly approaching, it’s not uncommon to hear about homeowners finding various critters holing up in their homes for warmth, shelter, and protection from predators – as well as extensive breeding to the point of infestation. However, one woman out in Omaha, Nebraska discovered a less common invader inside her home – a huge hive of honeybees in her attic, leaving dozens of combs throughout the confined space. “We heard a loud and rhythmic buzzing that was somewhat terrifying because we knew what it meant,” says homeowner Becky Reilly. This lead to Reilly contacting the Takoda Green roofing company to get some more experienced hands on deck to help her.

Among this company’s contractors are several beekeepers, who offer bee removal services that ensure the bees are gone from a house, but not at the expense of the hive and the thousands of honeybees attached to it, which is exactly what Reilly wanted. “She was concerned about saving her bees – getting them out of the attic at the same time,” Janelle Greico, one of the Takoda Green beekeepers who helped remove the hive, said.

The infestation itself was said to be so widespread that there was honey dripping on down the right side of the house. “You could see the honey comb down right next to the eaves,” said John Gebuhr, a 40-year veteran of the beekeeping industry. Even he admitted that in his four decades as a beekeeper, Gebuhr hadn’t seen a honeybee colony like the hive that had taken up residence within Reilly’s attic. According to Jason Starkey, a Takoda Green contractor, “The damage was terrible. The honey was coming through their soffit, and it was just leaking down the side of the house.” In total, the team removed over 40 pounds’ worth of honey right alongside the various hives sections in the attic.

By Reilly’s account, the idea that she had an entire colony of bees in her attic without her knowledge is a strange one, especially considering there were no obvious points of entry in the attic itself. According to Gebuhr, however, all it takes is one nickel-sized hole for the bees to get in and make themselves at home. In the end, not all of the honeybees survived the extraction process, but the ones that did are currently living inside Gebuhr’s garage, where they will hibernate until spring comes around.

“Yeah, if you keep bees, I’ll guarantee you you’ll get two things – stung and sticky,” Gebuhr said, describing his profession. At Reilly’s request, Gebuhr plans to set a hive up in her backyard—rather than one in her attic—once the temperatures warm up next year. Gebuhr’s first collection of honey – perfectly called “Attic Fall 2017” – will soon be followed by many more rewarding jars of local honey.