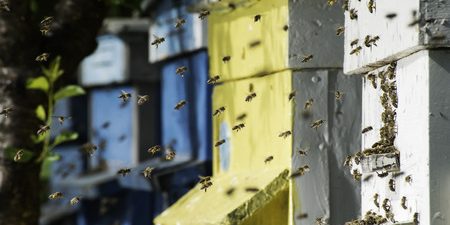 Given the importance of honeybees to the environment and agriculture in general, biologists have been working for years to try and understand the enigmatic colony collapse disorder (CCD), which is the leading suspected cause of honeybee decline in recent decades. Oldooz Pooyanfar, a graduate student with Simon Fraser University in British Columbia, is among those working to learn about CCD, and her method of doing so involves tracking what bees “say” to one another and how it reflects the state of their health.

This hive monitoring system, which Pooyanfar created at SFU, gathers communication details via sound from within the hive. Currently monitoring over 20,000 bees in multiple colonies, Pooyanfar’s contributions could offer incredible insights in a time when they are needed most, given the 30 percent honeybee decline on the North American continent in the last decade.

For the hives Pooyanfar uses to test her system, she sets monitoring platforms against the wall of the hives and then fits them with small sensors containing accelerometers and microphones, which monitor vibration and sound respectively—humidity and temperature are recorded as well. The system allows data collection via sound from inside the hives while also tracking any abnormalities, which beekeepers may respond to immediately if need be. Pooyanfar’s system is currently in use this summer collecting data.

According to Pooyanfar, who’s working with a honey company in Chilliwack, better understanding of a hive’s daily conditions and patterns, by creating a synthetic neural network of the hive, can help improve management of bee colonies. For instance, current monitoring methods offer less thorough information and often disturb honeybee activity for 24 hours each time a hive opens.

“To learn about what bees are communicating, we can either look at pheromones—the chemical they produce—or sound,” said Pooyanfar. “With this monitoring system, we are collecting data in real time on what the bees are ‘saying’ about foraging, or if they’re swarming, or if the queen bee is present – right now we are collecting as much data as possible that will pinpoint what they are actually doing.”

As an SFU grad student in its Mechatronics Systems Engineering School, Pooyanfar plans to ultimately produce sensor packages for this type of system, because it would help lower monitoring costs while also allowing greater numbers of beekeepers to properly monitor their colonies without delay. Such an innovation could inform beekeepers and bee farmers of problems before they grow into something worse and cause hives to collapse.