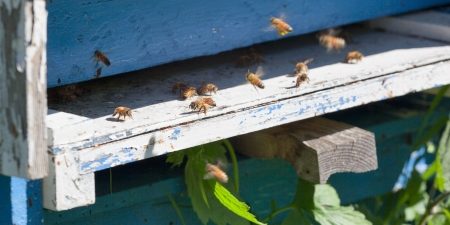 Until 2010, honeybees were considered “wild animals” per New York City’s Department of Health. This meant that keeping bees within city limits was illegal, despite a handful of rogue apiarists operating anyway. However, when the city lifted the ban, it unleashed a local honey movement that has yet to show any signs of slowing down. For most apiarists in Brooklyn, beekeeping is one beneficial hobby, providing honey for handing out on special occasions and for selling in farmer’s markets, but there are businesses installing hives as well, such as the rooftop Brooklyn Grange farms and the local Marriott hotel. Presently, there are 91 registered apiarists keeping up 285 hives in the city, with Brooklyn having over 100 and Queens having comparable numbers.

Web designer Mimi Chan started beekeeping after she lost her house and backyard garden in her divorce. Chan’s cousin was the one who pointed her in the right direction, telling her about a nearby beekeeping class. “She thought it would help me get over losing my garden. I enrolled in the class and fell in love with beekeeping,” says Chan. “That was five years ago, and I’ve been beekeeping ever since.” Since then, she’s been keeping two hives in her yard, often posting her bees’ activity through Instagram.

It might be easy to believe honeybees, typically associated with fields and orchards, would have a hard time in cities. However, in reality, urban honeybees have a very good quality of life in the city for a few reasons, such as their hives being able to stay in one place rather than be moved around between crops as is done in agriculture. There is also the city’s diverse abundance of street trees and flower gardens as well as the lack of large scale pesticides, though Chan has experienced some difficulty involving pesticides. “I’ve had seasons when the whole hive has died because of neighbors using pesticide,” she says. “It’s a very difficult thing to watch.”

Balancing the Bees’ Work and Their Keeper’s Skill

According to Chase Emmons, a master beekeeper for Brooklyn Grange, “Like with chickens, no need for [the bees to have] constant attention.” He also says handling honeybees can be easier than raising cats: “With cats, you want to feed them daily [and] change their litter. Bees do most of it themselves.” At the same time, beekeeping requires considerable skill and knowledge, as many new beekeepers discovered soon after the practice was legalized in New York City when it became clear beekeeping calls for both instinct and expertise. “It’s always frustrating when you do everything right, but the bees still get sick,” said Tim O’Neal, who is a biology teacher and hobbyist beekeeper. “Sometimes, you have to listen to them, go with your gut, and be a creative problem solver.”