Can Bees Live on Mars? 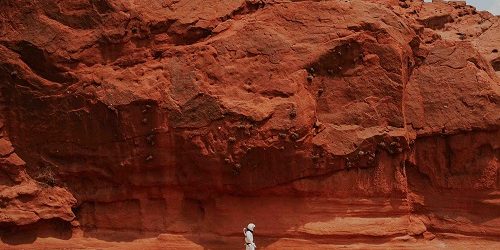 One of the great mysteries in life is just how Mars’ environment would be suitable for human beings.

We know we would probably have to live in a controlled environment, but how would that environment impact other life forms on our planet? Researchers tried to answer that question as it pertains to be honey bees and it was not a positive result.

The research project started with 90,000 bees, the equivalent of a little more than one normal hive. They placed the honey bees inside tents that were sealed and controlled for humidity and temperature. The honey bees did not take kindly to the new living conditions, as researchers stated they started to die off in groups of more than 1,000 every few days. But, that was not the only problem.

In addition to the accelerated death of the bees, which normally have about a five-month lifespan, the bees started to be very lackadaisical. It appeared to the researches that the bees were going into winter mode, showing almost no activity at all. Furthermore, there was almost no reaction by the bees when plants in which they would normally pollinate were placed near the hive.

One of the more curious habits of the bees, when they did leave the hives, was to gather around the lights that were inside the tent. It was as though they were craving sunlight more than anything else, even food. They also noticed the queen stopped reproducing, which would put the hive in danger of complete elimination. Queens typically produce about 1,000 bees every day, so there would be nothing to offset the normal death rate of the bees even during normal circumstances. When temperatures were lowered, all of these behaviors were increased.

This is a major discovery because food is obviously going to be a major challenge on Mars. As far as we know, the soil there is unable to grow anything, so “farms” would have to be kept indoors under managed conditions. With the current information from this study, foods solely and even partially reliant on honey bees for pollination would not even be a possibility. Foods like almonds would not be possible and fruits like blueberries would have yield impacted by the lack of a pollinator.

What are the alternatives if we cannot grow plants? Bugs. Yes, you read that correct, bugs. Specifically, crickets, because they can be ground into a protein-rich flour. Researcher Keith Cannon stated, “Bugs are the way to go, if people can get over the gross factor.” No thanks! I think I will stay here on earth where the honey bees can do our pollinating for us!