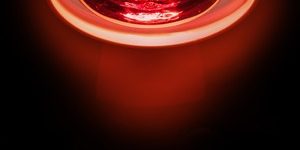 Previous research has shown that these pesticides affect a honeybee’s ability to produce Adenosine Triphosphate (ATP), an energy source, and maintain healthy cellular function. The pesticide-poisoned bees that weren’t treated with light therapy showed reduced levels of ATP and symptoms of diminished mobility. The bees that were exposed to the near infrared light were more mobile and had better survival rates.

A former researcher, Michael Powner, explained the signs of recovery he saw in the bees after light therapy. “We found that by shining deep red light on the bees which had been affected by the toxic pesticides that they could recover, as it improved mitochondrial and visual function, and enabled them to move around and feed again.” Light therapy could help maintain the health of bee colonies. Extreme weather, pesticides, varroa mites, and colony collapse disorder (CCD) are a few threats facing bee populations—this therapy could help to revive sick, dying colonies.

Another control group treated with light but not exposed to pesticides still showed higher survival rates than the control group that was neither poisoned nor treated. The new studies suggest that light therapy is best used as a preventative method but can still trigger recovery amongst bees that have been exposed to pesticides within two days. Bees are now one of several insects that have been shown to benefit from regular exposure of infrared light.

Glen Jeffery, a researcher at the UCL Institute of Ophthalmology, mentions the advantages of light therapy for bees. “Long-wavelength light treatments have been shown in other studies to reduce mitochondrial degeneration, which results from aging processes…It’s beneficial even for bees that aren’t affected by pesticides, so light therapy can be an effective means of preventing loss of life in case a colony becomes exposed to neonicotinoids. It’s win-win. When a nerve cell is using more energy than other cells or is challenged because of a lack of energy, red light therapy can give it a boost by improving mitochondrial function. To put it simply, the light recharges the cell’s batteries.”