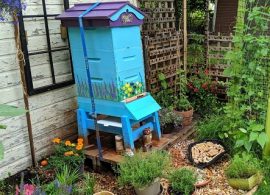 For all the negative stories about the plight of honey bees right now, it is so refreshing when we see or hear about a story where even a few people are trying to make a difference. Such is the story of Will Hatchel, who has created a sort of “bee oasis” in the backyard of the home he shares with his husband, Chris. It is just one of several projects they have undertaken to make just a small difference in their part of the world.

To understand why Will wanted to make a difference to the plight of the honey bee, one need look no further than the number of rescue animals around their home. Currently, there are eight cats that have been rescued and are now living inside the home. What is amazing is that most of them were wild feral kittens that were caught and trained by the couple. On their property, they have an outdoor winter shelter for cats as well as leaving food out for stray cats.

In 2019, the city of Cedar Rapids made an ordinance change that allowed residents to keep bees on their private property. The ordinance had no sooner passed when the couple filled out the forms to be eligible and ordered some Italian honey bees. When the bees arrived, the work started to turn a section of their backyard into an oasis for their new buzzing friends.

Cedar Rapids is apparently a beekeeping mecca! A local community center is teaching a beekeeping class and it filled up virtually instantly. In fact, the center is already taking reservations for the 2020 session. Hatchel and Wand, however, took a different route to gain their expertise. They are self-taught, courtesy of internet research and a lot of time in front of Youtube videos. Hatchel stated, “I thought there was so much involved, but it’s not that difficult.”

The “oasis” was created because Hatchel did not just want to sit there and watch a hive. He stated, “The yard was just grass last year. I decided to do something with it. At the end of April, I went to Home Depot and just started buying plants, bulbs, seeds. Now I have an appreciation for gardening. I’m constantly pulling things up and putting new things in … I think at some point, there’s not even going to be a yard with grass, just a garden.” After reaching out to Will, he stated that the main goal for the hive this season is simply to help the hive survive through the winter. That being the case, he has no plans on removing any of the honey the hive produces this year. He stated, “I am not taking any honey from them this year. Just want them to thrive and survive the winter. I will take honey next year.”

Will is realistic in that their effort to help the plight of the honey bee is but a speck in the overall picture, but it is something. If more people took the same approach, who knows, we just might beat this problem once and for all.

Source: The Gazette, Photo used with the expressed permission of Will Hatchel via Backyard Life Facebook Page