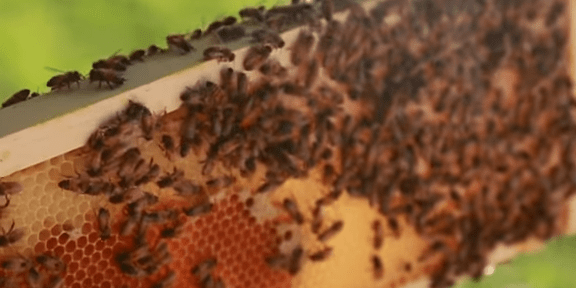 Detroit is a city that often finds itself in the headlines for all the wrong reasons, but that is not the case this time. A couple of Detroit natives are trying to use honey to bring a neighborhood overrun with blight back to prominence.

The non-profit organization is run by Timothy Paule and Nicole Lindsey. They started Detroit Hives last year to raise money so they could buy vacant properties, then turn them into functioning bee farms.

Timothy Paule stated, “These properties are left abandoned and serve as a dumping ground in most cases. The area can be a breeding ground for environmental hazards, which creates a stigma around the city.”

He is absolutely right. Anyone that has lived in an inner-city has seen the abandoned homes that are often turned into drug dens or used by squatters. In some cases, neighbors will flee the neighborhood in anticipation of what is to become of it and before you know it, entire neighborhoods have been overtaken by abandoned homes and criminal elements.

So, why use honey to turn the neighborhood around? Paule says it all stems from a simple cold that he was unable to shake.

He stated, “I went to the local market that I normally go to, and he suggested that I try some local honey for my cough. He said you consume local honey because it has medicinal properties.” Not long after he started to take the honey, Paule says he started to feel better and the idea for his non-profit was born.

Before starting their organization, the two had to become certified beekeepers, which they did by taking two courses. Soon thereafter, they purchased their first property for a whopping $340. The property was brought through a local program that looks to redevelop properties that have been abandoned in the city.

Director of Inventory at the land bank, Darnell Adams, stated, “The land bank offers a community partnership program for nonprofits and faith-based programs to purchase structures or vacant land from the land bank to put back to productive use. We encourage them to bring their visions and their proposals to the land bank so that we can give them access to land to implement them.”

Paule and Lindsey’s organization is also about creating local awareness off bees and how they benefit us. They offer tours of their farm, education classes, etc…

Mr. Paule stated, “It was a little hard at first because most high-schoolers are afraid of bees or they really don’t care. So, I had to find a unique way to introduce bees to them. One thing they found intriguing is how each honeybee had a unique job.”