Does Puerto Rico Hold the Key to Saving Honey Bees? 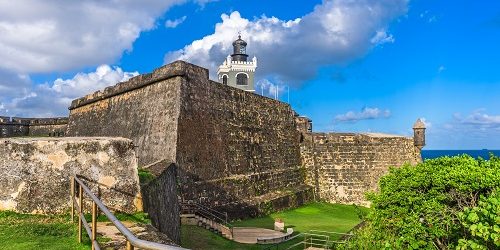 As we all remember, Hurricanes Maria and Irma knocked out the electricity in Puerto Rico and uprooted thousands, but the storms wreaked havoc upon the island’s smaller community members as well—billions of domesticated and wild honey bees were displaced or killed as a result of the storms and the aftermath. Now, roughly 18 months later, honey bee populations have rebounded, and it’s left some researchers thinking the bees could bring new regrowth opportunities for the island.

According to apiarist and biology professor Tugrul Giray, Hurricane Maria left wreckage that blocked the way to the building housing his 23 honey bee colonies. After four days, he reached the hives, “but I really didn’t have ways to feed them,” Giray said. Both hurricanes stripped the land of vegetation, thus eliminating his bees’ best food source. To add to it, grocery shortages had beekeepers waiting in backed-up lines to buy sugar, which can act as a provisional replacement for vegetation and flowers.

Puerto Rico’s Agricultural Department said around 80 percent of the island’s bees died in the hurricanes. Giray, several other beekeepers, the USDA, and the nonprofit Pollinator Partnership worked together by getting new hives for sheltering the important insects as well as protein “patties” for filling in any nutritional gaps left by sugar water. With these efforts, Giray estimates that Puerto Rico’s honey bee populations have bounced back by 50 percent already, which was much faster than his team anticipated.

As a University of Puerto Rico biology professor, Giray has been researching special traits within Puerto Rican honey bees. A study he co-authored, which was published in the journal Nature Communications, demonstrated these bees’ unique traits, including the fact they’re descended from Africanized honey bees, also called “killer bees,” which are known for aggressively pursuing intruders in droves to protect their territory. However, they’re also hardy, productive, and less vulnerable to parasites and diseases.

Africanized bees would actually be perfect for beekeepers, but their aggression prevents this from being possible. On the other hand, Puerto Rican honey bees have similar qualities to that of Africanized honey bees, but they’re gentler. Giray’s team suspects that Puerto Rico’s environment, a tightly populated island, led to their aggressive qualities being bred out, allowing them to produce higher honey yields while also maintaining a solid immune system. Because of their strong stock, scientists are now wondering—could Puerto Rican honey bees be the solution for colony collapse disorder (CCD), which has contributed a great deal to their decline in the last few decades?

Giray and his colleagues believe Puerto Rican queens should be shipped into the U.S. to help fortify existing bee colonies, giving them the genetics they need for long-term survival. Exporting these bees up to the main U.S. could also provide beekeepers in Puerto Rico what they need to restore their income after the hurricanes last year. “My rough guesstimate is that it could be a $20 million industry,” says Giray. “It sounds small compared to U.S. mainland numbers, but for this island, that will be a good amount.”