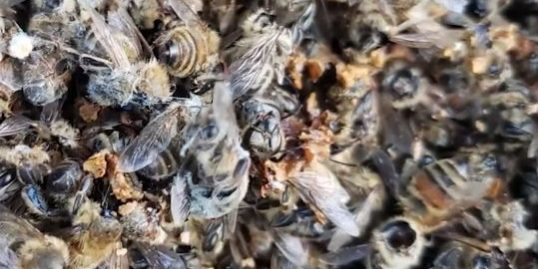 The Asian Giant Hornet, a.k.a. murder hornet, seems to be alive and well in North America. There has been one official sighting and another alleged sighting that has left mass destruction in its wake.   The hornet that was spotted is no longer able to do any damage because it was stepped on, but it does seem that another nest is likely present in Washington State.

On May 15, a resident in Langley, British Columbia reported a confirmed sighting. The individual stepped on the hornet, killing it, and agricultural officials later showed up to collect the insect to verify that it was, in fact, an Asian Giant Hornet. Now, officials are expected to conduct additional testing to see if the hornet was a queen and/or if it had mated recently.

A more disturbing incident happened in Washington state, however. Whatcom County beekeeper Ted McFall believes the murder hornets ravaged though some of his hives. He keeps about two dozen hives in the county, and he recently noticed a rather large pile of dead bees outside the hives that fit the MO of the murder hornet.

McFall stated that the bees had had their heads chopped off and slaughtered. Just a handful of hornets can destroy tens of thousands of bees very quickly. They hover outside the hive and wait for the bees to return, picking them off one at a time. The hornets rip off the heads of the bees and quickly move on to their next victim. Once the hornets have killed off the live bees, they then ravage the hives for the bounty.

There is a lot of speculation by experts that this “danger” to honey bees is being way overstated, but McFall would probably disagree with them. As we have already seen, it does not take a major presence for these hornets to do significant damage. If even one nest can set anchor, virtually every hive in the immediate area could be in danger. When only a handful of hornets are needed to wipe out 30,000 bees, it is cause for alarm.

For now, though, their presence seems to be minimal, but this is something we will keep an eye on moving forward. It is also important to know that bees can defend themselves against the hornets, but they need to get them inside the hive while they still have a significant presence. As we reported before, if they can do this, the hive can swarm the hornet and cook the insect to death.