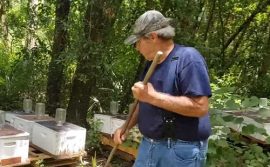 As if honey bees are not having enough problems these days! On Sunday, a local Florida beekeeper noticed that something was amiss with his hives. Horace Bell, who is arguably one of the largest beekeepers in the United States, found millions of dead bees when he checked his hives. Additionally, many of the bees that were left alive were listless.

Bell has been working with bees for more than six decades. As such, he knows when something is “off” with his bees. His hives would not go from completely healthy one day to dead and listless the next unless something happened to them. Bell believes his bees were poisoned by someone and he is willing to pony up $30,000 to the individual that provides the information that leads to the arrest of the culprit.

Why Kill the Bees?

According to Bell, not everyone in the area is a fan of the bees being so close by. Bell will now move the healthy hives he still has to the Fort Pierce area for safekeeping. In the meantime, his business has been dealt a significant blow. Current pricing for bees is roughly $50 per pound and there are about 3,500 bees to a pound. Bell estimated that he lost about 7,000,000 bees, so that is about $100,000 loss just to replace the stock. Of course, there is also the loss of income from the honey they produce or leasing fees if Bell leases them out as pollinators to farmers.

With record losses in the books from this past winter, this is a horrific blow to the plight of the honey bee. Bell was probably already going to have to replace 30-40 percent of his hives anyway, now he is more or less starting from scratch. Hopefully, the bees he has remaining will be able to keep his business afloat while he recovers from this outlandish attack.

This story also makes it very apparent more bee education is needed in this country right away, especially if the person that did this did so because they were afraid of being stung. As we know, most honey bees in this country are European honey bees, which are far more docile than some of their other counterparts. They will not get aggressive unless they are attacked. So, as long as people stay calm, there is very little danger of being harmed.