Florida School Children Get a Quick Lesson in Beekeeping 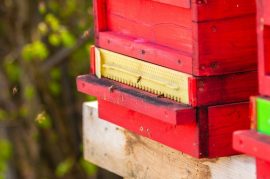 We firmly believe getting children educated about bees as early as possible goes a long way in promoting the overall health of our honey bees. The more children know, the less likely they are to be afraid of bees if they happen upon a stray hive or a swarm of bees. Earlier this month, a group of students in Florida and members of the 4-H Club were treated to a crash course in beekeeping.

The learning experience was provided by different “phases of agriculture” to explain the different aspects of Florida agriculture to the group. The day of learning was considered an Ag Venture program and it was organized by Florida’s Farm Bureau Federation District 5 Women’s Leadership Chair Valerie Ansell. She stated, “I have a passion for educating our youth about all aspects of agriculture. This is one way we can bring together different commodity groups to do that.”

Carman Fraccica was responsible for teaching the group about honey bees. He covered topics such as how the bees are raised to how they make honey. Fraccica has 400 hives under his care, with each hive producing about 120 pounds of honey. He also happens to work for the Florida Department of Agriculture as a beehive inspector. As part of the educational part of his program, he would show the children photographs of different vegetables and fruits and ask them to guess which ones were pollinated by honey bees.

This program was about more than honey bees, though. The children were taught about other key agricultural areas, such as cows and the role they play in farming, for food, as well as the different products made in some form from cow by-products, such as lotions and leather for boots. Additionally, they were taught the role of cowboys in the agriculture industry, which surely played well with these children.

The most exciting part of the day, though, seemed to be when the children were taught about forest fires and how they are fought. Four members from the Division of Forestry Firefighters discussed these issues with the children, then they let them work the firehose and the radio, which got all of their attention.

When the children were asked about the program, they did point to all aspects of it being enjoyable, with one child, Zeke Redmile, stating, “The part I liked best was the bees.” Zeke probably would not have made that statement last month, but with a little education, he surely now feels safer around bees as well as being more interested in them, and that is all that really matters!