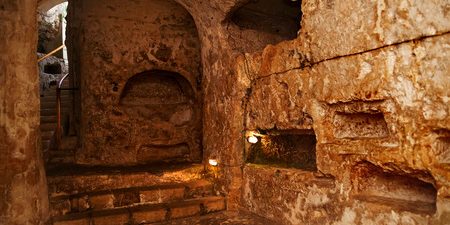 “We are 20 meters under Paris, and absolutely nothing comes to trouble us and my barrels. So, it’s the perfect place to grow mead,” says Audric de Campeau about a spot below the metro. De Campeau is an apiarist who uses his own honey to make mead or honey wine as it is sometimes called. The alcoholic beverage is a mix of honey and water that has to be fermented in a cool, humid place that is also quiet and perfectly still.

In the Parisian catacombs, the humidity levels rise to about 90 percent, making the catacombs perfect for de Campeau’s winemaking. By the 17th century, after the bubonic plague, Paris cemeteries were overflowing; graves were suddenly overstuffed and corpses and, on occasion, became uncovered. To solve this problem, remains were placed beneath the streets in old tunnels from the 13th century, referred to today as the city’s catacombs, which are now open for tours and visitors as well as for beekeepers like de Campeau.

Mead is the blending of de Campeau ’s two passions—beekeeping and winemaking, both of which he started to experiment with as a teenager. “My parents had a house in Champagne,” he said. “They’re not winemakers, but it was a dream as I was thinking, maybe, if I do one or two bottles would be fun.” Since then, his small vineyard grew over the years as he continued tending to the grapes while studying philosophy in college. “Then, naturally, I thought about bees. So, I asked my parents [for permission] to install my first bee hive,” de Campeau said, but it posed a problem “because my father was absolutely allergic to bee venom.”

This led de Campeau to install his first hive in the woods far from his parents’ home. Eventually, de Campeau would raise his bees in Paris after they began to multiply. He began to build in his neighborhood, Les Invalides, where Napoleon’s tomb is located. Today, a lot of de Campeau’s hives are located on many of the most well-known monuments in Paris.

The hives can be found on top of the Musee d’Orsay, a former railroad station that now serves as an art museum, and on the roof of an 18th century military college near the Eiffel Tower. “I grow my bees 20-25 meters above Paris, and I grow my mead 20-25 meters under Paris,” de Campeau said. Selling honey has become his day job, and he hopes to experiment with honey-made treats, such as nougat and candies, in the near future.