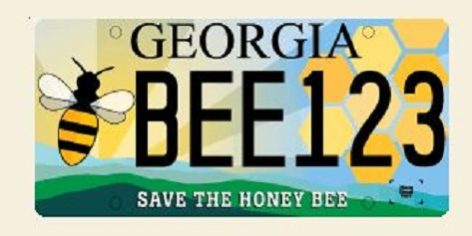 Honey bee advocates are finding all kinds of creative new ways to support our favorite pollinator. The Georgia Beekeepers Association (GBA) has found a new way we can add to this ever-growing list… license plates. Georgia drivers can now purchase “Save the Honeybee” plates to help raise money.

This latest effort is not without risk. There is a process that must be followed that could end up costing the GBA rather than helping its cause. Because it is a specialty tag, the GBA had to commit to covering the initial costs for the setup. That meant the GBA had to pony up a whopping $25,000 to the state to create the tags. The new license plates will sell for $25 each, so the breakeven point for the GBA is 1,000 plates sold.

Once the initial 1,000 plates are sold, the GBA will get reimbursed for its initial investment, then receive $22 for each additional plate. Jennifer Berry, an apiculture research professional and lab manager for the University of Georgia Honeybee Program, stated, “The idea of the honey bee tag had been tossed around for over a decade among members of the Georgia Beekeepers Association, but due to the cost and amount of work it would require, the idea was tabled numerous times.”

The tags have actually been available since June of last year, and the GBA is almost at the breakeven point. To date, they have sold 820 tags, with most of those tags being sold to non-GBA members, which is exciting news. This means people are finally jumping on board with the cause. Berry stated, “This is amazing and, due to the diligence and hard work of so many folks, social media and the marketing campaign, that is still going on today.

The state has been on board with this from the very outset. Berry stated, “Another cool tidbit is that no one had ever gotten a license tag bill passed through the state legislature as fast as the GBA did.” The process started in November 2017. In February 2018, the State House approved the request and the Senate approved it in March. On May 3, 2018, Georgia’s governor signed the bill into law.

The GBA must hit its 1,000-tag deadline within two years of the initial sale, so by June 2021, the initial run of tags must be sold to keep the program rolling. While it looks like they will get there on their own, any push we can give them will help, because we want them to get their initial $25,000 back as well as the additional money to raise public awareness about the “conservation of the honey bee.”