German Native’s Plan for Honey Bees Starting to Get Momentum 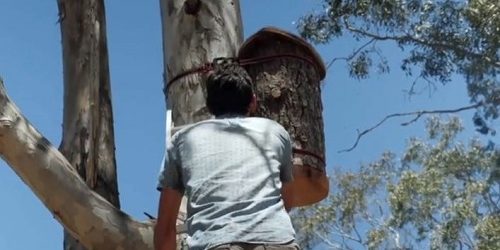 Michael Thiele, a German native that now lives in California, is echoing sentiments by bee experts that hives are a major problem in the beekeeping industry. Thiele believes one of the contributors to the massive decline in the honey bee population is the domestication of honey bees, something he hopes more beekeepers will address by “rewilding” their bees.

Wild bees will often create homes in areas that provide shelter naturally, like hollowed out trees. Thiele believes hives used by beekeepers are far different in terms of the protection they provide as well as the setting inside the hive itself. For instance, manmade hives tend to be made with very thin wood with small openings. Instead of using a “typical” hive, Thiele is hollowing out tree logs and hanging them from existing trees to mimic a natural hive.

The “natural” hives that Thiele is creating are clearly working. According to Thiele, they are often filled within days, but always generally within a few weeks. What Thiele has noticed is that these wild bees are no longer victims to the Varroa mite that is killing off managed and domesticated bees. Over the years, the wild bees Thiele has been housing have built up a resistance to the Varroa mite, something domesticated bees have been unable to do.

Unlike regular beekeepers, Thiele does not raid the hive for honey. Instead, he allows the bees to use the honey as intended and only harvests it when the bees abandon the hive or they die off. While Thiele’s idea was once considered a fringe idea, other experts in the industry are now singing the same tune. Most notably would be Dr. Derek Mitchell from the University of Leeds, who is adamant the hive construction by beekeepers is a huge part of today’s problem.

Something else Thiele pointed to is something we have discussed in detail here on numerous occasions, and that is bad beekeeping practices. With so many “hobby” beekeepers dipping their toes into the industry, bees are also dying off because of a lack of training and bad practices by beekeepers. Two regular practices by beekeepers are using smoke and chemicals to calm bees as well as sometimes feeding bees sugar water in place of honey, both of which Thiele believes are doing the honey bee community far more harm than good.

To read the full profile of Michael Thiele in Reuters, click here.