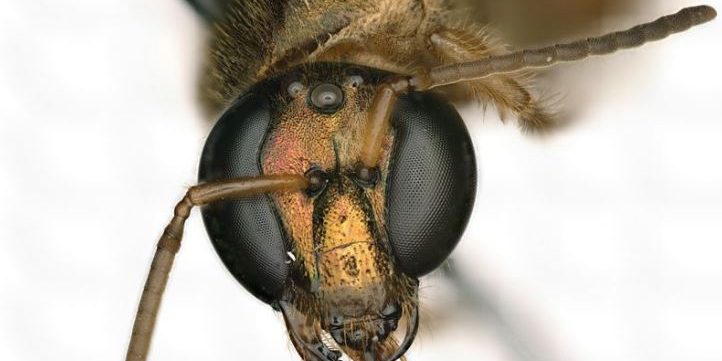 Every now and again, nature lays something on us that is truly spectacular. Recently, that happened in the bee world. A report was just published in the Smithsonian Magazine of such a discovery that happened in 2018 by Erin Krichilsky. She found a bee with both male and female characteristics.

This phenomenon in nature is called Jinandromorphic. When a creature falls into this category, it is known for having the features of both genders of its species. When Krichilsky first made the discovery, it resembled something you would see in a horror movie, where a monster has been created by putting together the different parts and stitched together.

When Krichilsky first examined the bee, she knew she had something incredible. She stated,  “It was this super cool individual that wasn’t anything like what I was used to seeing. It was a very exciting day.” The discovery was added to the Journal of Hymenoptera Research in a recent report. According to the report, this was the first-ever identified in the Megalopta amoena species, a bee that is predominantly found in Central and South America. This is only the second recording discovery of a hybrid bee (the first being in 1999).

The Jinandromorphic is far different from a hermaphrodite, which some are mistaking this bee for online. A hermaphrodite outwardly appears to be male or female but has the reproductive organs of both. This category of creatures has their entire body as mixed, which is truly unique and rather bazaar to see.

Experts stated that it is unique in honey bees because, in the insect world of bees, ants, and wasps, females do just about everything “interesting.” Adam Smith, a biologist at George Washington University, stated, “They collect pollen, build nests, take care of the kids.” The point being that females are the ones with stronger features. While still unsure exactly how something like this happens, the researchers believe it was a “development mishap.”

Within the Smithsonian report, there is an interesting explanation of how this may have happened:

“On very, very rare occasions, a second sperm can sneak its way into an already-fertilized egg—a would-be female—and start copying itself, Oldroyd explains. This creates two asymmetrical lineages that each populate their own half of the growing embryo: One arising from the union of the egg and the first sperm that develops as female, and another, born out solely from the second, freewheeling sperm. Because this second sperm never partners up with its own egg, the chromosome count in its lineage stays low, creating only male cells.”

To read the full report on Smithsonianmag.com, click here.