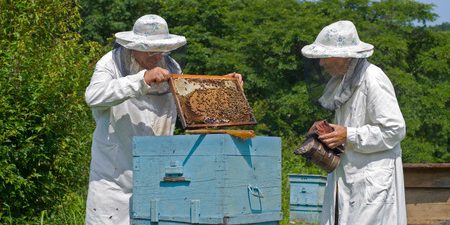 When most people imagine a veterinarian’s job description, they likely picture him or her treating dogs, cats, rodents, birds, or even larger animals, such as horses, cattle, or pigs. However, due to brand new regulations at the federal level, vets will soon have to grapple with a new type of “pet” – honeybees. Given the grave state honeybees have been in for the last few decades, brought on by colony collapse disorder (CCD), it should come as no surprise that the pollinators would garner some new protections from a government whose economy depends greatly on the success of its agricultural industry.

One such veterinarian who has become used to “hive calls” is Dr. Terry Kane, a vet from Dexter, MI. While on one of these hive calls for a friend of hers, Kane explained how she always looks for various things while examining hives, specifically bee activity, brood patterns, and the number of dead bees if there are any. “You want to see an arc on a frame of capped brood, uncapped brood. Then, the pollen kind of rainbows over that, and the honey food source rainbows over that,” Kane said.

Several years ago, Kane was made aware of the FDA’s new regulations regarding beekeepers and their antibiotic access. “I kept bees, I love bees, and I knew about the regulations, so I put those together and became a bee vet,” Kane said. Before these regulations became active in the last year, beekeepers could simply buy antibiotics from honeybee supply companies and farm stores. However, with the FDA’s added sanctions, beekeepers now require approval from their vet.

According to Dr. Chris Cripps, who owns a Greenwich, NY bee supply business, these rules were put in place to counteract antibiotic resistance often seen in production animals, including honeybees. “Your doctor may not give you a prescription for antibiotics if you have a cold — that’s part of it. [Vets] having to say, ‘yes, these animals truly are sick, and this is a warranted need for the antibiotics’ — that’s a similar part of that same effort,” says Cripps. So, for the time being, beekeepers must find licensed veterinarians, such as Kane and Cripps, who are certified to treat honeybees.

For many larger commercial beekeeping operations, such as the one owned by Michigan native Terry Klein, these new regulations are superfluous steps for problems they are used to treating without their vet. While his town’s local vet has the necessary bee training, not every city or town does. “It’s not a normal relationship. They’re used to working with four-legged critters. It’ll work out all right — it’s just complicated. It’s political,” Klein said. “I can understand what they’re trying to do, but they don’t understand what we’re trying to do.”

Echoing these concerns is the fact that most vet schools don’t offer much or any honeybee education. At the same time, many vets are more than willing to learn, with Michigan specifically having 22 vets who are offering to treat honeybees. While it’ll certainly be awhile before honeybees are regular patients, it is at least a step in the right direction.