Hobbyist Beekeepers Save Hives in Virginia 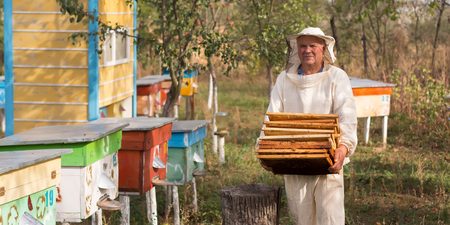 Recent weeks allowed several employees with Virginia’s transportation department to flex their beekeeping skills at work by saving approximately 120,000 honeybees in Amelia and Powhatan counties, allowing the bees to carry on and pollinate as they see fit. While removing dangerous, leaning trees within Powhatan County, a VDOT crew discovered a honeybee hive inside a tree by the roadside. According to team member Butch Sirry, one contractor onsite started cutting down the hive tree and kept getting stung. Sirry stated, “They notified the inspector that they couldn’t take the tree down…[that] we should contact an exterminator, which has been a normal practice in the past.”

However, the department now has hobbyist beekeepers Sirry, Melvin Morrison, and Bruce McFadden around to help. McFadden, a residency administrator, was called to the site in Powhatan and saw the hive could be removed from the tree after it was cut down, as it was already coming down anyway. Once the homeowner gave permission, the contractors brought the tree down and safely removed the hive. “Honeybees are vital to the environment, so we didn’t want to harm them. Our crews also could have been stung if they disturbed the trees without safely removing the hives,” says McFadden.

The other noted save over in Amelia County saw a tree brought down during a storm, and it was discovered to also contain an active hive, says Morrison, who acts as a VDOT supervisor. In both of these cases, the beehives were extracted from the trees and safely moved to a Powhatan County property. “It was rewarding to use our hobby on the job to save bees’ lives,” says Sirry. “We were able to make the roadsides safer for the public, keep our workers safe, and better the environment by rescuing the honeybees.”

For these three hobbyist beekeepers, the bigger picture with these extractions was to keep the bees alive but also local. Honey bees as well as other bee species are known to be declining in vast numbers, with beekeepers losing more hives each year. This is obviously a problem considering how important bees are as pollinators for farms, orchards, and wild flowers. “If we can find local bees, they are used to the environment in this area, so they have a much higher survival rate. Any time we can come across a swarm of bees or bees that are in a bad location and we can relocate them, that is a great opportunity,” says Sirry.

The Huguenot Beekeeper’s Association, which Sirry, McFadden, and Morrison are part of, is working to promote technical advisement regarding extraction, so that bees can be safely removed rather than killed.