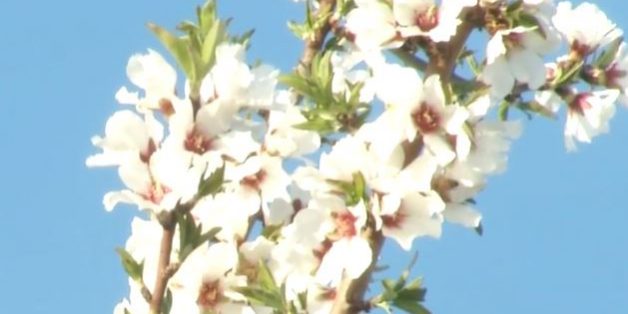 We all know about the declining honey bee population, but there is work to be done and the bees that are still alive in this country are starting their work season. The California almond season has officially started, and bees are coming in from all over the country to help almond growers meet the demand.

While many parts of this country are still enjoying the briskness of winter, California is already in bloom. Leading the way is the almond industry, which strongly relies on honey bees to pollinate the orchards. Without honey bees, quite frankly, the almond industry would be in dire straits. Breanne Corley, owner and beeper at Kern County Bees, stated, “The quality and quantity is dependent on a healthy pollination.”

Because of the honey bee shortage, almond growers like Corley are depending upon honey bee supplies from all over the country. She stated they have seen bees being shipped all the way from Florida to help growers pollinate their almond trees. Even with that help, though, there are additional problems these growers are facing.

First, there is the usual problem of people seeing bees in the area and swatting them. Many of these orchards have regular roads that go right through them, so there is considerable traffic, which can lead to interactions between the bees and these people. Corley stated, “It’s important not to swat [the bees].” She also hinted at the other problem, stating, “There is a shortage of honey bees, but the challenging part as beekeepers is overwintering.”

Overwintering is something we have discussed before, in the colder temperatures killing off hives. When overwintering happens, some bees naturally die off and others are simply kicked out of the hive by the other bees for not doing their part.

If they are not able to get enough bees, the entire crop could be off. Corley stated, “Any type of disturbance of the blooms disrupts the quantity of their yield.” As mentioned above, to avoid this disturbance, growers are asking commercial beekeepers to help out in what is already the biggest migration of honey bees in the world. Corley stated, “Commercial beekeeping takes a lot of effort and beekeepers are sending their bee boxes from as far as Florida, North Dakota, Washington, all over the country.”

Source and Photo via Bakersfield Now