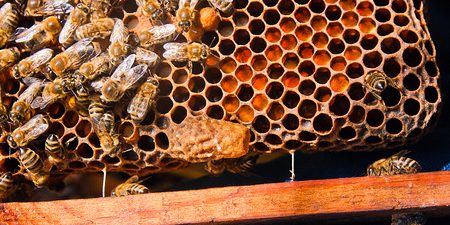 Many are well aware of the important role honeybees play in our lives and in global food production and food security, which is why their decline in the US and on a global scale has alarmed world leaders and ordinary people. It’s set many on the path of increasing bee numbers and cutting down the likely factors contributing to their demise, whether it’s colony collapse disorder (CCD), pesticides, malnutrition, pathogens, mites, loss of habitat, and so forth. New Zealand, the home of Manuka honey that is said to be one of the most advanced beekeeping countries in the world, especially recognizes the importance of honeybees and the crucial role they play in the country’s market, and in an effort to raise awareness for the honeybee, on August 1st the island country revealed a new coin paying homage to the humble insect.

The Reserve Bank of New Zealand unveiled the hexagonal, silver coin with its color image and “Apis melifera Honey Bee” engraved above it, with one writer on the subject stating, “The honeybee is an integral part of our lives, providing honey while pollinating flowers and plants that provide the human race with needed sustenance.” Considering honeybees are responsible for pollinating one-third of the food we eat, this statement is quite true. Since beekeeping was introduced to Northland in 1839, honey has become one of New Zealand’s most progressive, valuable industries—all thanks to honeybees, hence the country’s dedication to bee survival.

Honeybees, complicated creatures with eusocial behavior, cause their hives to act more like organisms themselves, with individual bees acting as essential parts of one body. A hive’s hierarchy consists of one queen, female workers, and male breeding drones, all obviously fitting into one specific function each. Queens, the sole producers and layers of thousands of eggs, live on average around two or three years and are absolutes for a hive’s survival.

Worker bees, a hive’s largest group at approximately 20,000 to 80,000, generally only live six weeks during honey season when they store nectar, feed larvae, and produce honey. All of this in the name of the queen, whose offspring are said to be 75% related to a hive’s worker bees, speaking to how the evolutionary pattern of worker bees giving up their fertility evolved, since their offspring would only be 50% related to them. This is due to the genetic makeup of male drone honeybees, who begin as unfertilized, haploid eggs laid by the queen, with their life span focused specifically on the one task of breeding during a single breeding season.

While such a system obviously doesn’t work for humans, as the caste system taught us, this complex, self-functioning system works for honeybees. Being so essential to the pollination of fruit and vegetable crops while still so at-risk with almost half of hives collapsing and dying every season, honeybees now have the chance to get even more attention and the help they need. The six-sided coin, which incorporates the motif of a honeycomb cell where nectar and pollen are stored, depicts a bee on a honeycomb, partially filled with amber-colored resin as if to replicate real honey, and it will be available in September 2016, housed in a unique hexagonal case made from colored acrylic.