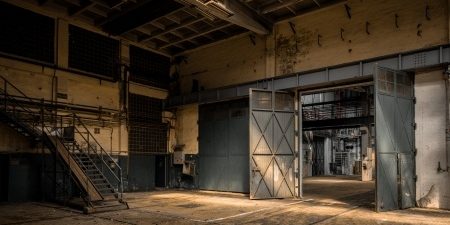 In Arlington County, Virginia, David Mueller, who works part-time as a beekeeper, was driving along when he noticed a strange mass on an old, vacant plumbing supplies building near the road. The mass appeared to be spreading out from a boarded-up window on the second floor to rest of the building’s façade. Thanks to his background as a beekeeper, Mueller knew just what he had seen—roughly 70,000 honeybees. They had managed to build a huge hive along the window within three months, which was how long it had been since the supplies building was in use.

According to Mueller, “Walking by, if not paying attention, you wouldn’t notice it…There’s no smell, no sound, and it was very high up on the roofline.” Arlington County had apparently purchased the building last year and intends to raze it down per a planned construction for a town square within Nauck, the neighborhood in which the bees were found. This clearly presented a serious danger for the bees in that building.

Since Mueller lives in the Nauck neighborhood, he likely knew about the construction plans, so he contacted Chikwe Njoku, who is one of several coordinators for the Arlington County neighborhood revitalization program. Eventually, Mueller was given permission to move the bees. On a blisteringly hot July day, Mueller and Emily, his wife, both of whom belong to the Northern Virginia Beekeepers Association, started the process of moving the hive. They wore the full protective apparel and entered the bricked building. The pair came upon the thousands of honeybees, who did not cooperate, along with around a hundred pounds of honey.

Taking Down the Hive

Mueller said, “The biggest issue was the heat. At 95 degrees, the wax is very, very soft, and the honey is very, very heavy.” They worked for roughly six hours either on the ladder propped against the building outside or on the sweltering, darkened second floor inside. Mr. and Mrs. Mueller took down the hive by hand, carried pieces with plastic bins, and placed them in traditional beehive boxes. The pair captured as many bees as they could find, even discovering the queen walking along the plywood on the window.

With honey season in full swing, the bees had built “a very large hive in a very short time,” producing armfuls of honey with relative ease. However, the honey from the building wasn’t safe for human, or any, consumption due to the building’s windows containing lead paint as well as the building’s general unsanitary surroundings.

The plan is to strain the honey and then return all of it back to the beehive, which the Muellers have moved into a nearby community garden, for the bees to consume while they continue to pollinate. “[They] will need it to get through the winter,” said Mueller. He is hoping the county will support the idea of displaying the hive at the local elementary school for students to observe, even offering to transfer the hive himself if he must.