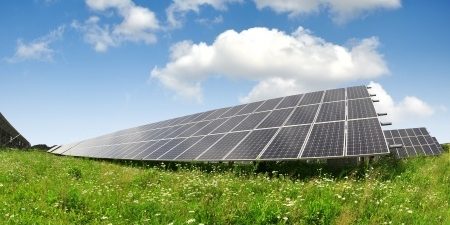 In Minnesota, a new law was passed stating how solar panel sites could provide suitable habitats for pollinators, but in the process this law also led to commercial beekeepers and solar companies working together for mutual benefit. When Governor Mark Dayton signed into law the Pollinator Friendly Solar Act last year, the legislation specified voluntary criteria for overseeing native habitats for songbirds, pollinators, and similar beneficial creatures. These guidelines recommend seed mixes, plant layouts, and site maintenance ideas for local governments and solar developers to use to provide the ideal environment for these pollinators.

By following the state’s regulations, including making the sites’ vegetation layout available for the public, solar companies can receive a certification for their efforts—and many solar providers throughout Minnesota have been joining the fray. Considering pollinators like honeybees face rapid rates of habitat loss from development, mono-cropping, and logging, this is good news, especially since U.S. honeybees alone faced an over 40 percent rate of decline in 2016.

One customer-owned solar power company, Connexus Energy, serves around 130,000 people on Minnesota’s eastern side (all of whom buy shares to avoid installing and maintaining panels at home), and it originally incorporated a pollinator habitat into its SolarWise Garden, which is in Ramsey, Minnesota, shortly after the law passed. However, the company went further and set up beehives in April 2017. Partnering with a local beekeeping operation, Bolton Bees, Connexus Energy became the first solar facility in the U.S. to have a commercial honeybee operation.

Now, two different companies with much larger solar sites, around 40 acres a piece, have started apiaries. “Altogether the three sites provide pollinator habitat equivalent to more than 40,000 homes each having a 6 by 12 pollinator garden,” says Rob Davis, who works for an environmental consultancy, Fresh Energy, in St. Paul, Minnesota. Travis and Chiara Bolton, who own Bolton Bees, have started their first harvest from their three sites, extracting 3,600 pounds of “Solar Honey” (honey produced on solar sites) so far. The Boltons will extract their last 20 frames during an event in October, with most of their harvest getting sold and a portion going to solar donors and local community fundraisers.

In addition to Minnesota sites, the Boltons are looking to start operations at Iowa, Illinois, and Wisconsin solar sites, hoping to promote the concept of creating marketable honey products to other beekeepers and establish standards for the industry. “Solar Honey” is now trademarked, and the Boltons can license the name to food producers, energy companies, and other beekeepers who follow specific production standards. Per Travis Bolton, “We hope that this model can be replicated throughout the nation.”