How Honey Bees Turn into Undertakers 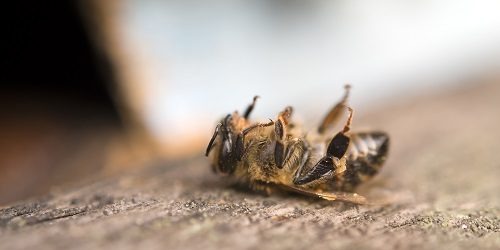 With colony collapse disorder still a significant problem and the coronavirus taking a toll on hives around the world, it got me to wondering how the bees that are alive in the hive figure out when their buddies have died and need to be removed. If you have ever seen a hive with massive die-off, you will know exactly what I am talking about. You can go to a clean hive one day and see the ground below the hive littered with dead bodies the next, so how do they figure this all out?

So, inside the beehive is this incredible effort, with all bees having their role. When one bee goes down, to put it bluntly, they are in the way. Forget about all the hard work the bee has done to that point, they have to go. In watching hives, you will see bees drop and be removed inside of 30 minutes, but how do the other bees know the bee is dead?

Jenny Jandt, a behavioral ecologist at the University of Otago, Dunedin, stated, “The task of undertaking is fascinating.” She would go on to say the work that has been done by Wen Ping, an ecologist at the Chinese Academy of Sciences’ Xishuangbanna Tropical Botanical Garden, is “pretty cool.” As we have done, Wen wanted to know exactly how the bees figured out so quickly that another bee had died in the hive, and what Wen found was, as Jandt stated, “pretty cool.”

Various insects, including bees, are covered in compounds called cuticular hydrocarbons (CHCs). This is one of the elements that make up a waxy covering on their exoskeleton. Think of it as a coat of sorts that protects them from drying out. If an insect is alive, this coating releases molecules into the air. When they are dead and their bodies cool off, the molecules stop being sent.

Wen suspected this was behind the quick action of the bees. When he added dead bees to an existing hive, the undertakers came fairly quickly. In many cases, the dead bees were removed within a half hour. However, when Wen heated the bees in a petri dish by just a few degrees, the body often went unnoticed for hours. Wen assumed that the undertaker bees left the dead bee alone due to the fact the heating of the bee’s body continued to release the pheromones into the atmosphere, fooling the undertakers.

Wen finalized his assumption by washing the dead bees to remove the waxy coating from their bodies. When he placed these bees into a hive in the heated petri dish, the undertakers immediately performed their duties and removed the dead be in that 30-minute mark, confirming his suspicion. Jandt stated, “I think [the heating experiments] were the coolest part of this study. [Wen] makes a strong case that a reduction in temperature and a reduction in cuticular hydrocarbons leads to undertakers perceiving a dead bee as something that needs to be removed.”

While Wen’s study is huge progress on this front, not everyone is ready to hand him the gold medal just yet. Yehuda Ben-Shahar, an entomologist at Washington University in St. Louis, stated, “I think this study is a good start. It does make sense that there is some chemical signature of a dead bee, but I wouldn’t say that we now know exactly what is going on.”