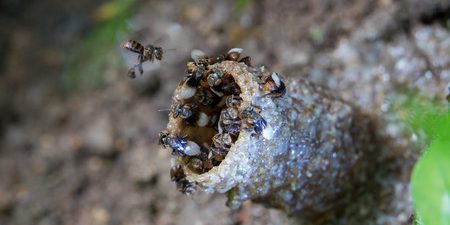 A recent study, published back in April 2017, has taken the study of bees and brought in a twist worthy of Game of Thrones or The Tudors, finding that some species of stingless bees, specifically Scaptotrigona depilis worker bees, can become queen slayers if a hive’s queen produces sterile male offspring, at which point a new queen – her daughter – would be born to take over and hopefully produce fertile male bees, thus ensuring the hive’s survival. So, why would stingless worker bees favor one queen over another based on the fertility of their sons? To answer this question, it’s crucial to understand how female worker bees and male drones differentiate in terms of their genetics.

When it comes to human beings, we’re “diploid” organisms, meaning we have two alleles for each gene, one from both parents. Bees are slightly different—female bees come from fertilized eggs and have two alleles per gene, making them diploid, and they are made via mating between the queen and a male bee, also called a drone. Drones are “haploid,” created only by the queen’s unfertilized eggs (no mating involved) and thus have only one allele per gene.

Queen bees mate only once before storing sperm for the remainder of her life—from here, she may decide whether to fertilize any given egg and controls the number of offspring she creates. However, sometimes a rare diploid, sterile male bee appears, formed when a diploid worker bee larva is born male rather than female, which can be disastrous for a hive’s survival because these bees consume resources without contributing to reproduction or hive maintenance.

When a bee’s body decides to become female or male, it refers to the complementary sex determination (CSD) gene. If a CSD gene has two alleles, coming from a fertilized egg, the bee develops into a female. If the gene has just one allele, coming from an unfertilized egg, the bee develops into a male. Oftentimes, this system has no kinks, but if by chance a queen mates with a drone carrying a CSD allele matching hers, half of her diploid offspring will have just one type of CSD allele and become male, which effectively halves a generation’s workforce. Understandably, existing worker bees have a problem with this.

As mentioned previously, researchers looked at a species of stingless bees, identifying hives with developing diploid males and then introducing a healthy new queen into each nest (including hives without diploid males as control groups) to track activity. The new queens introduced into colonies with sterile males died mysteriously roughly 10 days after the males emerged, despite not being those bees’ mother. The new queens in both types of colonies weren’t any different from the other, meaning genetic factors could be ruled out. It’s more likely the mere presence of the diploid males, not the queen, was what caused the worker bees to eliminate her—a response that would advantageous in the wild to ensure the hive’s survival.

As to how the sterile males were detected, the study’s researchers found that diploid males and regular haploid drones smell different. These differing smells develop around 10 days after males emerge, which was when the queens in the experimental hives started dying off. Even more interesting, this study’s authors suggested queens likely can’t tell which mates potentially possess a CSD allele similar to theirs, which hopefully dispels any “Red Wedding” connections these queens have.