How to Fight Bee Decline: Swarms 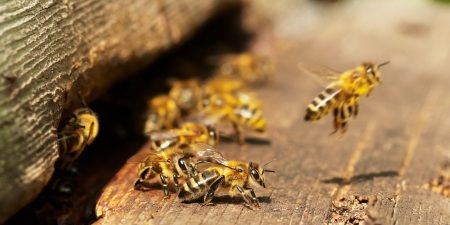 Every summer, it’s not uncommon to hear about these supposed freak occurrences where giant swarms of honeybees are found in the most conspicuous, open of spaces where anyone can be stung and scared away by them. Sometimes, those stories end with people reacting the wrong way (calling the exterminator) or the right way by calling a local beekeeper to take them safely away. Those stories can come from anywhere in the United States, and this week a beekeeper out of Pittsburgh, PA has a few stories to tell about the pollinators—and a few factoids the masses ought to heed.

“Honeybees are very gentle. They’re docile,” Stephen Repasky, a Pennsylvania beekeeper, said. “They’re not going to bother anybody unless someone bothers their hive. Honeybees are responsible for over one third of the food we eat. One out of every three bites of food can be attributed to pollination by honeybees. There’s so many things they do, from building their own wax to producing honey.” Repasky also stated that while they may seem like something from an old horror movie, bee swarms are merely honeybees trying to find a new home after their old one become too large, requiring half to split off with a new queen for the betterment of the colony.

As a second-generation beekeeper who was raised on an Armstrong County farm and learned about beekeeping as early as age four from his father, Repasky also heads Burgh Bees. This organization promotes honeybees as well as the beekeeping trade in general, often getting calls about swarms being spotted in populated areas. Part of his job is teaching people how to be less scared of honeybees and of the bees’ many contributions to the environment. This is especially important considering that as of this past year, several species of bees are now on the endangered species list. In total, there’s been a decline of 87 percent since about the 1990s, as per the Fish and Wildlife Service.

“We’re losing approximately 40 percent of our bee population every year,” Repasky said. “We’re able to recover that 40 percent in the spring by dividing hives, but when we’re losing 40 percent of our population every winter, it’s not sustainable.” While swarming alone is not enough to save honeybees, it has certainly done plenty to get them as far as they have, domestically and in the wild, in replenishing numbers. “If they split up and swarm, that swarm has a greater chance to survive because there’s lots of food sources out there,” Repasky continued. “It’s a natural occurrence. It’s as natural as a robin building a nest on your porch.”