How to Tell If You Are Allergic to Bee Stings 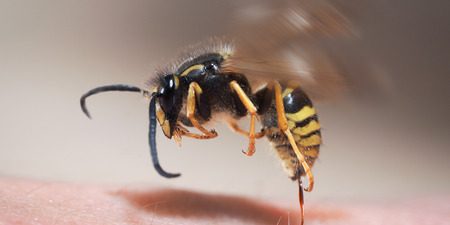 It is that time of year when the honey bees are out and about to bring their bounty back to the hive to create honey. It is also the time of year people are more likely to be stung, usually because they are far too aggressive around the honey bees. Not surprisingly, those allergic to bees are often the ones showing the most panic around bees when a calmer head could get them out of the situation without being stung.

What is a Bee Sting Allergy?

Basically, if you are allergic to bee venom, a sting by a honey bee will send your system into a state of panic. Dr. Lakiea Wright, the medical director of Thermo Fisher’s Scientific ImmunoDiagnostics Division and associate physician at Brigham and Women’s Hospital, stated, “Your immune system goes haywire. Your body mounts an immune response because it’s perceiving the chemicals from that sting as a foreign attack, like an alarm bell.”

If you have a bee venom allergy, your body disburses Immunoglobulin E (IgE), an antibody, after you are attacked. If you happen to be stung again, the bee venom begins to interact with the venom, which will then trigger the allergic reaction.

The reason honey bee stings present such a problem for those that are allergic is the bee stinger itself. Honey bees have barbed stingers, which often gets the stinger stuck in the victim, where it continues to pump venom long after the attack. Emory Matts, M.S., a board-certified entomologist and technical services manager for Western Exterminator Company, stated, “The venom sack will continue to pump venom into the wound, and this is why it is important to remove a bee’s stinger after getting stung.”

Dr. Wright explained some of the symptoms those allergic can experience. She stated that the first sign is actually rather mild, with “a large and localized reaction where the sting actually occurs. You can get some redness, swelling, and itching.” She then added, “But there’s another type of reaction, which is called a systemic reaction.” These are far more severe, such as upset stomach and dizziness. These are the beginnings of far more severe symptoms, such as a drop in blood pressure.

The one thing you want to make sure is that you don’t find out the hard way that you are allergic to bees. If you suspect or want to know, the safest route is to talk to your doctor and set up an appointment with an allergist, who can test you for allergies. The test is very simple and only takes a few minutes to conduct.