Human Food Dogs Should Not Eat 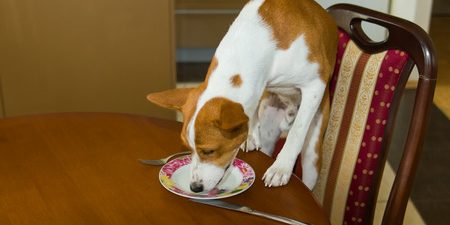 Every dog owner knows about feeding dogs chocolate and how it’s terrible idea, but it’s crucial they know about every human food that can potentially harm their dog. With this additional knowledge, you can start offering just healthy foods while keeping the harmful ones out of your beloved pet’s reach. If you’ve had dogs long enough, you know that your dog’s taste buds are trained to crave human food, and you also know how much your vet likely disapproves of it. Admittedly, a well-balanced diet that also includes human food can be prepared for your dog, but it must be the right kind of food. If you’re concerned your dog may have consumed harmful foods, take them to the vet immediately.

Regarding raisins and grapes, these fruits can do irreparable damage to a dog’s kidneys, potentially resulting in the animal’s death. Ingesting four or five raisins or grapes can be toxic to 20-pound dogs—though an exact dose isn’t clear. Sensitivity may also depend on the dog in question. Symptoms of toxicity, which usually start within a day of consumption, include appetite loss, vomiting, abdominal pain, diarrhea, lack of or decreased urine production, and weakness. Your veterinarian may have to pump the dog’s stomach and recommend aggressive supportive care afterwards.

When consumed by dogs, onions as well as chives and garlic may cause Heinz body anemia, which is caused by the breakdown of red blood cells and can result in kidney damage. It’s unclear how many onions together are toxic, but the consequences may be cumulative. Toxicity can come from cooked, dehydrated, and raw forms, so avoid handing out table scraps, even baby foods, that have onions in them. Secondary symptoms to anemia include rapid heart rate, pale gums, lethargy, and weakness. Treatment may involve oxygen administration or blood transfusions followed by fluid therapy.

Caffeine, which is much like theobromine, the poisonous chemical within chocolate, may damage the lungs, kidneys, heart, and the central nervous system, with common sources including coffee, coffee beans, caffeine pills, chocolate, and tea in large amounts. Signs often start with hyperactivity, vomiting, and restlessness, possibly followed by weakness, panting, drunken gait, muscle tremors, swelling heart rate, and convulsions. Treatment may include gastric lavage or induced vomiting, activated charcoal, and then supportive care with medications and fluid therapy.

While not considered deadly to dogs, macadamia nuts can cause severe illness. At this time, the toxin in question is unknown in addition to the toxicity’s mechanism. Ingesting even a small handful of macadamias can produce adverse effects in dogs. Symptoms include weakness, vomiting, drunken gait, joint swelling, muscle/joint pain, and depression, with onset typically being between six to 24 hours. In most cases, dogs are treated for symptoms and should recover within two days. In-hospital care could be recommended when dogs become especially sick.

For those concerned that honey is on the list of things forbidden to their dog, they can be rest assured that honey is a safe food for dogs to consume—though in small amounts to avoid obesity issues. If you’d like to feed honey to your dog, speak with your vet about an amount that is okay for feeding them. Generally, less is better regarding dog treats, particularly for smaller dogs. For dogs with health conditions like diabetes, again, speak with your vet about whether honey would be safe to feed them, perhaps offering cucumbers or something similar if not.