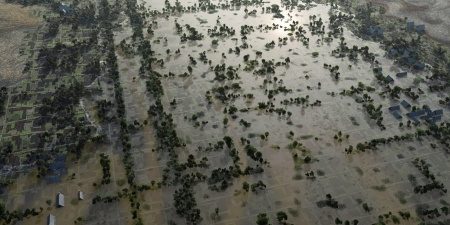 While rain storms are often welcomed with cheers once summer temperatures climb into the 90s, there are clear consequences when those rains start producing severe flooding. No one has to be told twice how dangerous flood waters can be and how they can uproot entire families, but even small-scale flooding that doesn’t break national news can have life-changing consequences for everyday folks. One such person is beekeeper and businessman Phil Raines, who runs his own honeybee operation in Winnebago County, Illinois.

While he originally had hive sites at three separate locations in his home county, two of Raines’ sites were devastated by excessive rains—one this past week and one back in late June, the latter of which saw Raines lose 50 percent of his honeybees. This equaled out to around ten percent of Raines’ total product, something that would have been devastating on its own without the second round of flood waters this week.

“All this clover that’s underwater,” Raines said. “Unless they have scuba gear, they won’t be able to get to the plants,” says Raines. His Pecatonica, IL hive location—the second site to be flooded in two months’ time—resided on the Torstenson Youth Conservation Education Center, which reportedly had seen its planting of butterfly milkweed and swamp milkweed come to full fruition this year and go beyond expectations. Such a loss has left Raines’ bees with no choice but to feed on their honey stores, reducing the amount they will have for winter when there will be nothing for them to pollinate.

“The bees that were in the hives that they were able to save and get out of the water—all the honey that’s in there they still need to eat. They’re up there eating all the honey back just to stay alive.” During both storms, according to Raines, the flood water rose well above the hives, with the queen living right at the base. “About 1,000 bees a day is what’s hatching in there,” Raines said. “If she doesn’t have a place to lay in there because it’s damaged, that means less bees, less honey production.”

With his business having suffered two severe losses in such a short time, Raines estimates that he has lost around 6,000 pounds of honey. Unlike cattle or other livestock, Raines could not insure his honeybees, making this a complete loss on his end. He even worries this might be the last year his operation is in business.

Luckily for him, however, he may just get a break from his streak of bad luck. A local college has asked Raines if it could rent a few of his remaining hives for the purpose of a study. Hopefully, those payments may help Raines counter his recent losses and put him back on track.