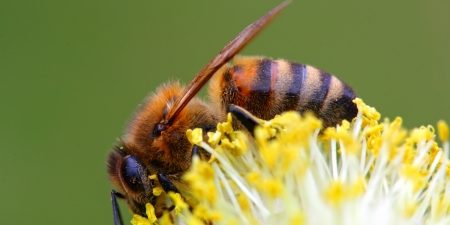 For several years now, we have heard how much in danger bee populations are. The danger bell was first rung regarding colony collapse disorder and it has not stopped since.

There are numerous reasons bee populations are falling by the way side, such as pesticides and the depletion of many of their natural habitats. That being the case, more local communities are starting to step up and ensure the bee population will continue on.

One beekeeping enthusiast, Tim Caldwell of the Indy Bee Supply, says there are numerous reasons why the bees continue to struggle. He sites the reasons above as well as a dwindling food supply for bees.

Earlier this week, we published an article about a non-profit in Detroit. Indiana is experiencing a similar push, as new beekeeping businesses seem to be popping up all the time throughout the state.

Jeff Singletary and Richard Walton are a perfect example of the “bee” movement taking place in Indiana. They started their business more than ten years ago and today have more than 80 hives being maintained.

Singletary cites social media as being a major player in making people aware of the modern-day plight of the bee. It is so much easier to get the word out today about special causes such as this than it was just a decade ago. A simple search on Facebook or Twitter can provide a wealth of information and bring more players to the table in the effort to help bees.

The two business owners thought the big push for bees would eventually dissipate, but that never happened. Singletary stated, “We thought this would just be a kind of a fad but each year more and more people started beekeeping. We’re not seeing a downturn in that.”

Another bee business owner, Heather Harvey, is concentrating on promoting the health of local bee populations rather than imported honeybees. In Indiana, Caldwell says there are upward of 200 different species of native bee populations.

Harvey stated, “Native bees … they’re like single moms. You start out with 20 or so bee cocoons in a nesting box, they mate and the males go off and die. After that, all they do is gather pollen and lay eggs.”

Another trend we are seeing in this new bee movement is the business owners helping to educate the local community on protecting the bees and making sure their species goes on. Much like the Detroit non-profit, most of these beekeepers run programs where they hold tours or go into local schools to educate children on the importance of bees in our world.