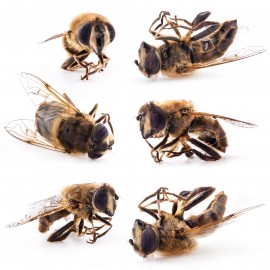 The White House is currently investigating a specific type of insecticide for fear on how the chemical can impact honey bee populations. This particular insecticide has been found in almost half of the streams that scientists sampled across the United States, this according to study released by government researchers this week. The study was published in Environmental Chemistry and completed by the researchers at the United States Geological Survey.

According to an article posted on BusinessInsider.com, the study shows that five types of insecticides were present, in varying amounts, in almost 150 of the samples the team took from approximately 50 streams. One particular type of chemical was present in over 60 percent of the samples, according to USGS researcher Michael Focazio. The samples collected included many different waterways found throughout the Midwest and Southeast areas of the country and concentration level varied.

Neonicotinoids, a chemical that is structurally similar to nicotine, is one of the fastest growing insecticides currently on the market and is used in both agricultural and urban settings. Evidence has begun to mount of the last few years that link the wide-spread dying off of bees, crucial to pollinating the country’s crops, to the use of these types of chemicals. Additionally, scientists are beginning to fear that this class of insecticide is also responsible for killing off other kinds of pollinating insects.

Neonicotinoids and how they impact the environment has been a hot topic of conversation in Washington as of late – The United States Environmental Protection Agency proposed a rule just three months ago that would temporarily create a pesticide-free zone to help protect commercial honey bees. These restrictions are meant to protect bees pollinating plants to serve as one-quarter of the country’s crop production and the food that adorns American’s dinner tables every night.

While environmental groups, beekeepers and some scientists say that neonicotinoids are harming honey bees, agrichemical corporations such as Syngenta and Bayer disagree and instead blame other factors such as mite infestations for the increasing loss of honey bee populations.