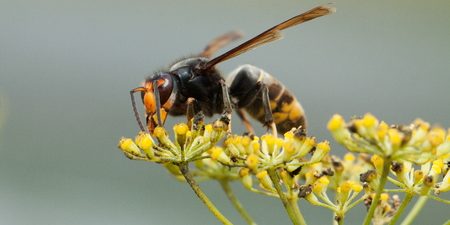 Honeybees and similar pollinators all over the world are facing many dangerous fronts when it comes to their survival—pesticides, malnutrition, diseases, pathogens, lack of habitat, and so forth. The honeybee populations of some countries have more geographically specific problems, such as those within the United Kingdom. The issue for the UK’s honeybees involves an invading species—the yellow legged hornet or the Asian hornet. Per new research from both Newcastle and Warwick Universities, if Asian hornets are allowed to colonize the UK, there might be hundreds of thousands in little more than 20 years, which would put a severe strain on pollinators like honeybees.

Asian hornets are smaller insects than native British hornets, with full grown worker bees measuring 25 millimeters in length and the queen measuring 30 millimeters. During spring season, hornet queens that survived winter start small nests, usually in sheltered locations, such as garden sheds or a roof’s eaves. From there, they raise their first generation of worker bees, which eventually take over the queen bee’s foraging duties. The nest then grows quickly, with the hornets often establishing secondary nests that have more space for expansion. These nests quickly become quite large, often found high in tree canopies.

Asian hornets prey predominantly on honey bee colonies, hovering just above their hives and waiting to kill them while the bees return to the hive from foraging—they reportedly bite off the heads of their prey and eat the rest, which is a process called hawking. It’s estimated that one hornet can eat up to 50 honey bees per day as well as bumblebees and hoverflies.

This team of researchers, led by Professor Matt Keeling, ran a simulation for the likely infestation of Asian hornets across the United Kingdom over 25 years, beginning from one active nest at a site close to Tetbury, Gloucestershire – the first Asian hornet nest to be verified in the UK before being destroyed in 2016. The Asian hornet is believed to have first come to Europe in 2004 in a Chinese pottery import into France. Since then, the hornet has spread beyond France into Spain, Portugal, Italy, Switzerland, Belgium, and Germany.

“Our research shows the potential for this predator to successfully invade and colonize the UK, spreading rapidly from any new invasion site. Even if we have managed to successfully control this first invasion, the presence of a growing population of these hornets…makes future invasions inevitable,” Keeling said.

Because of the incredible likelihood that Asian hornets could drastically wipe out honeybee populations in the UK, there have been calls for beekeepers and people in general to remain vigilant and identify these insects if spotted. This way a confirmed hornet sighting can be taken care of immediately. It’s true Asian hornets are no greater danger to people’s overall health than other stinging insects, but they could still have serious effects on beneficial pollinating insects.