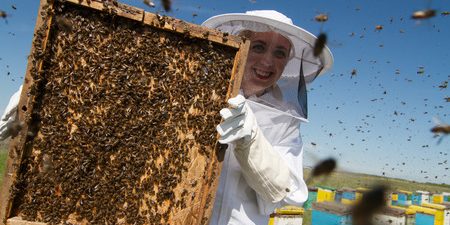 Over the past year, the American Beekeeping Federation (ABF) has been sending this year’s American Honey Queen, Maia Jaycox, and Honey Princess, Hope Pettibon, to various locations around the country to educate the general public, kids and adults alike, about beekeeping, the current plight of honeybees, and how important their role is to agriculture and society in general. To get to that position as a national level spokesperson, these young women needed both the knowledge and experience as well as a previous “honey queen” title from their home state. Just as the national honey queen and princess positions are crucial for public awareness, so are those at the state level, such as Iowa native Carly Vannoy.

Vannoy, who currently manages three hives, started as a beekeeper three years ago thanks to a youth scholarship program by the Iowa Honey Producers Association. She recently used her extensive knowledge to teach a group of people in the Estherville, Iowa Public Library about various bee proclivities as well as the differences between honeys. After acting as a local representative for her beekeeping club, Vannoy advanced to the state level and is now educating and informing the masses about honeybees as well as helping people discover an interest in beekeeping—right in line with her personal goals.

During her particular visit to Estherville, Vannoy clarified the process bees go through to produce honey, such as extracting nectar, creating honey within their hive, and capping it all off to decrease moisture levels. She also discussed the work beekeepers put into producing honey in order for everyone to take pleasure in it. “In the summer, we have two boxes where the bees can raise their brood and make their food,” Vannoy said. “When the boxes are full with ‘their space’ with the babies and honey supply, beekeepers will add their own space through a super box.”

To make sure she never lets honey go to waste, Vannoy will pour a little hot water into the bottom of a bottle, getting every drop, especially since honey takes a lot of work for bees to make. “It takes 12 bees their whole lives to make a teaspoon of honey,” she said. Vannoy even made sure her audience understood how important it is to save honeybees and other pollinators, given their crucial role in the environment. “Honeybees are an indicator species, which, if they’re dying, then something might be going wrong for the whole ecosystem,” she said.

Though the effects of honeybees dying off might not be felt immediately, Vannoy reminded everyone that there are a lot of products, including almonds and coffee, that would be impacted without honeybees to help with production. One solution, which Vannoy stood by at the end of the day, is individuals providing biodiversity—whether it’s a garden with bundles of different flowers or some potted plants, any additions to habitat can be greatly helpful for honeybees and similar pollinators.