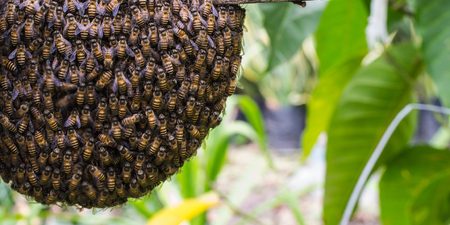 It’s easy to assume that when honey bee hives grow larger, they grow noisier in turn, given that more bees are moving around in there. However, a study that was published recently in Behavioral Ecology and Sociobiology is showing that larger honeybee colonies actually lead to quieter combs compared to smaller hives. “The surprising result was that—and at first I thought something must be wrong—when there are more bees on the comb, the vibrations are actually reduced,” says Michael Smith, who is a doctoral neurobiology student at Cornell University as well as the study’s lead author. The paper’s other co-author includes Dr. Po-Cheng Chen, who works in the computer and electrical engineering fields.

These researchers found that bees actively dampen vibrations on the comb, potentially through how they grip the combs, but more study would be needed in order to confirm the mechanism. This finding is vital because honeybees communicate using substrate vibrations within the comb. They perform what’s called “waggle dancing” to communicate with each other the precise locations of flower patches—these dances vibrate the comb and spread the message on to other honeybees. Even the queen bees convey vibrational signals, but to convey any messages, all other noise must be eliminated. This study underscores the universal desire to separate noise and signals in all organic systems whether it’s single-celled bacteria sensing their surroundings or human bodies sensing hormone concentrations, per Smith.

As to how this study came to be, Smith sought someone on campus with the necessary expertise for measuring comb vibrations. Smith eventually met Chen, who worked in a campus engineering lab at the time, because he could build computer chips with an accelerometer to measure vibrations within three different dimensions. According to Smith, “The chip takes 800 samples in one-eighth of a second and does that for as long as you need.” The pair then attached the chips onto the comb’s exterior, and they took comb measurements at various times, as the numbers fluctuate while the bees come and go. With every measurement, Smith also counted how many bees were on the combs.

Chen and Smith suspected the secret of how the honeybees dampen their vibrations lies in posture, with individual bees straddling various comb cells simultaneously and acting like “staples” to connect the cells together. Another hypothesis was that, as with sailors on teetering boats, honeybees lean and then compensate for vibrations, thereby stabilizing them. They also tested to see if the bees’ weight was dampening the comb’s vibrations—just as a sheet of paper that has paper clips would move less than one without.

Smith then added dead honeybees onto the comb cells while Chen took measurements of the comb with differing numbers of dead bees, providing various weights. Per Smith, the extra honeybees “had absolutely no effect whatsoever on the comb vibrations, which showed us that the bees are actually doing something to damp these vibrations.” These results show that living systems, such as superorganisms like honeybee colonies, are able to surmount physical obstacles using, as Smith puts it, elegant and curiously simple solutions.