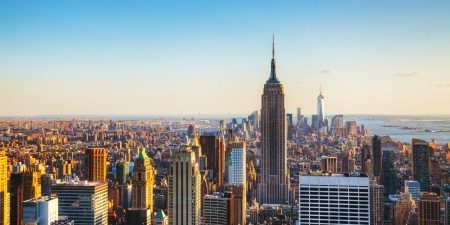 With the increased interest being shown toward honeybees and the general decline of their numbers in recent years, it’s becoming moderately common to hear about individuals and even businesses, especially restaurants, taking up beekeeping. These efforts are usually made to both help honeybees and harvest any honey the bees themselves can live without. Whether it’s out in the country or in a neighborhood, the extra care being offered toward the ailing pollinators likely goes a long way when done properly.

Even in a place like Manhattan – or perhaps especially in a place like Manhattan – raising honeybees offers much toward local pollination efforts and growing bee numbers. New York’s largest hotel, the Hilton, can now say it has its own apiary of sorts on the roof of its fifth floor, hosting six hives with around 450,000 honeybees inside them. The six hives, which received a literal red carpet greeting from a small crowd of people upon arrival, were brought to their new home in an old-fashioned yellow/black checkered cab on a sunny Tuesday morning.

These six hives already had their individual queen bees and were ready to start production, with Andrew Coté, a local urban beekeeper, heading the project through his company. Hilton officials have described the honeybees as “working guests,” and they will be producing honey for the chefs down in the hotel kitchens, which will likely contribute to many more available options for guests looking for sugar substitutes in their meals.

Beekeeping has only been legal within New York’s city limits since 2010, but it has been developing a quickly growing popularity ever since. Just last year, there were roughly 400 known beehives within the city, which was an increase of 35 percent from the year before. As many human visitors do as well, the bees atop the Hilton will likely use Central Park to their advantage, as it is only a short flight north of the hotel. “Central Park is a great spot for the bees because there’s almost 1,000 acres to it,” Coté said. “And there’s all kinds of nectar there. Nectar is their food stuff. They make honey from it. So, they go to Central Park, and it’s a huge buffet.”

According to Sasha and Tristan Pinto, who are students currently working with Coté, honeybees are usually docile enough that they don’t have to don protective gear all the time. Considering the bees on top of the Hilton are predicted to make roughly 300 pounds of honey every year, it’s safe to say that is great news for them and the hotel’s honey endeavors.