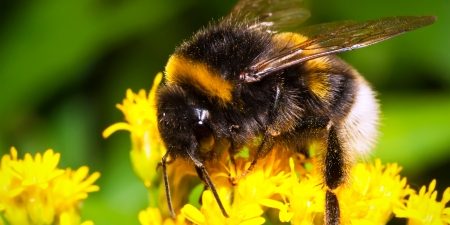 Robin Thorp, a retired entomologist from the University of California-Davis, spends much of his time in the mountains of southern Oregon looking for a bee. Specifically, Thorp is on the hunt for Franklin’s bumblebee, a species scientists fear may be extinct after having not been seen in ten years. Thorp, however, isn’t convinced and barely entertains the idea. Thorp, 82, continues his hunt with a bee net in one hand and a bee vacuum in the other. He walks from flower to flower, inspecting pollinators, vacuuming up what might be a Franklin’s bumblebee to closely inspect it. He does this for his own fulfillment, on his own time, and without pay.

Franklin’s bumblebee pollinated everything from tomatoes to cranberries, blueberries and melons (and still does if it is out there). They lived in underground colonies and cared for a queen, but like other bumblebees, they don’t make honey. Franklin’s bumblebee had a distinctive black face with “a solid black abdomen and a black inverted U-shaped design on its yellow thorax.”

Thorp became aware of Franklin’s bumblebee in the 1960s. He was taking an entomology course when he gained an interest in insects. It wasn’t until around 1998 that Thorp began to study Franklin’s bumblebee. Back then, he recalls seeing the bees on every patch of flowers. “I’d see 15, 20 of them in just a short distance.” Only a couple years later did the bee become harder to find. “It was just gone.” Thorp hopes to discover the reason behind the bee’s disappearance.

The U.S. Fish and Wildlife service has Franklin’s bumblebee listed as critically endangered. Researchers haven’t seen the species since 2006, the last documented sighting of one worker bee. There are a number of possible reasons behind the crash of these particular pollinators. Habitat loss, climate change, and the rampant use of chemicals could all be factors.

Thorp has an idea of what led to the bee’s decline. “One of the main reasons the Franklin’s bumblebee is at risk is because it has such a small geographical range. It has the most restricted distribution range of any bumblebee in North America and possibly the world. Its range is about 190 miles north to south and 70 miles east to west in a narrow stretch between southern Oregon and northern California between the coast and Sierra-Cascade ranges.”

When asked about the value in his project, Thorp points out that you can’t put an economic value on a species. “To me, they’re all valuable. They’re all priceless really…Franklin’s is one that I’ve had a lot of personal investment in in many ways. And, yeah, I feel an attachment and kinship to it.” Thorp admits that as long as he can walk, he’ll continue his search for Franklin’s bumblebee.