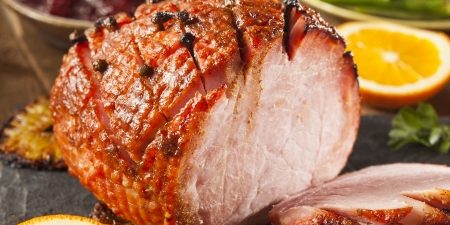 If you’re looking for a delicious final course for a dinner party that’s also easy to make, this Manuka honey rye glazed ham has got you covered! Nothing tastes better than a ham with the right amount of flavored glaze, and adding Manuka honey into the mix just makes the dish all the better. Admittedly, it might feel intimidating for less experienced cooks to try and make a ham that is a minimum of 12 pounds, but all it takes is following carefully laid out instructions and knowing what to look for in your ham. You just have to make sure to buy the right portion of the pig, meaning you’ll want a smoked, bone-in ham rather than a country ham, which has been called the American prosciutto by some.

The actual cooking for your ham can take up to two hours, with preparation adding another hour at most, so just be sure to give yourself plenty of time before you dive in to this dish. If you think this ham is the one for you, then let’s get started on that Manuka honey rye glazed ham!