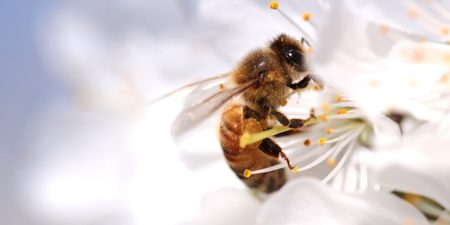 As we begin transitioning from warmer weather and into winter temperatures, known to be less than friendly when it comes to honeybees and their numbers, concerns from beekeepers about their colonies’ chances of survival are greater than ever. Out in Amherst, Massachusetts, several bee experts from the University of Massachusetts are contributing to the efforts to find the root cause of honeybee numbers dropping off. Fortunately, given the national and even global significance pollinators like honeybees have, the Department of Agricultural Resources for the state of Massachusetts is doing its part by funding these researchers’ tests in their UMass Amherst labs.

As part of their extensive testing, these researchers travel to various hives across the state to collect hundreds of either ill, dying, or dead honeybees, which can often be found outside the hive due to other bees forcing them out to protect the rest of the hive. These ill-fated bees are then taken back to the college’s medical zoology laboratory. “What I do is I’ll immediately throw them in this negative 80-degree freezer. This helps preserve the RNA, which is what we’re actually testing,” says Timothy Daly, a UMass lab tech.

Upon receiving the bees, techs like Daly follow a process of dissecting, tubing, crushing up, and extracting. All in all, they have been testing for eight viruses, and now that they have tested almost 700 honeybees thus far—maybe four colonies per interval—the results they have are surprising. “We found that three of those viruses are extremely common, with close to 100 percent of those hives being infected,” Daly said. Luckily, the remaining five viruses they tested for are very rare, but these results have posed a few more concerns for honeybee populations.

“The testing program is relatively new—only a year or two old—but it’s important work, learning just how healthy these hives are,” Daly continued. “Honeybees are so crucial to our agriculture and just to the environment in general. They pollinate so many of our crops for human consumption and animal consumption, so without honeybees, we’re in a lot of trouble.”

As to how this handful of hive viruses have spread so much in the past few years, there is, at this point, no concrete answer yet. One possible answer involves hives that are transported in mass between states, especially for pollination services in strong agricultural states like California—such transports would make it easy for viruses to spread through colonies and other states. Regardless, UMass Amherst will continue its research testing hives and the various viruses plaguing honey bee colonies alongside varroa mites, the effects of pesticides, and colony collapse disorder.