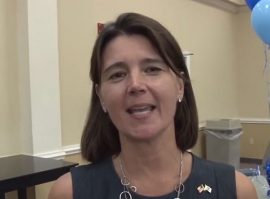 Finally, we are starting to see local lawmakers do their jobs and address the plight of our pollinators in their respective branches of government. Mass. State Rep. Carolyn Dykema (D-Holliston) is now officially a hero for this cause after pushing “An Act to Protect Pollinators” legislation through the Massachusetts House.

The new legislation was first proposed and sponsored by Dykema in January. A main component of the legislation is more restrictions on the use of harmful pesticides. The beauty of her legislation, however, is that restrictions will be in place not only for commercial farmers but also for those that are not considered professionals.

While neonicotinoids are harmful to honey bees, there are other pollinators that are just as sensitive, if not more sensitive, to them than the honey bee, such as the bumblebee. All species of bees are feeling the effects of this problem throughout the state, as Massachusetts has been hit harder than most states (at least compared to the average) when it comes to hive loss. Reports have state loss at more than 50 percent, at least 10 percent more than the national average, which was high compared to previous years already.

Dykema is pushing the fact that bees play a role in roughly in more than 30 percent of the food we eat, sometimes being the only source of pollination, to help drive home the need for this legislation. Her office stated the new legislation “offers a common-sense solution that works to limit (bees’ exposure) to harmful pesticides, while still recognizing the need for industry professionals to retain access to these products, with proper training and guidance.”

In addition to the restrictions, Dykema is also pushing for more foraging for the pollinators. The legislation would “require MassDOT to consider planting more forage along solar developments on state-owned land near highways, and the most recent update to the (Solar Massachusetts Renewable Target, or SMART) includes pollinator forage incentives for private development as well.”

This is not the first time Dykema has proposed such measures, as a previous bill introduced by her was defeated about two years ago. Even though this new bill has passed, it may still be months before the measures go into effect. While everyone is waiting for this to happen, Joan Milam, a research fellow at the University of Massachusetts Amherst suggested residents could show their support by “planting native flowers that provide nectar and pollen required for bees to provision their nests” come springtime.