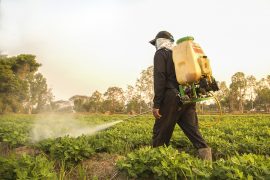 We all know one of the biggest challenges honey bees face is the use of harmful chemicals in products they are exposed to. The Trump administration recently lifted bans on some chemicals and products known to be harmful to bees. As a way to counter these recent government gaffes, an environmental group called “No Bees, No Food,” is trying to gain support throughout the state that would ban use of such chemicals and/or products throughout the state of Missouri.

One of the more controversial practices in terms of hurting the honey bee population is the coating of certain crop seeds with neonicotinoids, commonly referred to as neonics. This practice is used on some very large and very common crops honey bees pollinate, such as corn and soybeans. When the seeds are coated with neonics, the plant is then carrying the harmful insecticide to the honey been during pollination.

No Bees, No Food has worked hard to get local support for the legislation. The group got most of its support in the St. Louis and Kansas City areas, garnering thousands of signatures in the process. Environment Missouri Director Bridget Sanderson stated, “People are very supportive of the bees. Most people understand that bees are dying off but they are not really sure why and they don’t know how important bees are to the food supply. We’re going door to door to educate Missouri voters.”

The important aspect of this movement is that members realize pesticides and chemicals are not the only factors in declining honey bee populations. However, unlike the weather, this is something that can actually be changed and controlled. Sanderson stated, “We know neonics are killed bees off. And we can actually control the neonics.”

The other issues that are impacting honey bees right now are Varroa mites and cold weather. While we technically cannot control either of these issues, we recently found out there is the possibility we may actually be able to somewhat offset these factors as well. More bees are dying off in manmade hives than in the wild. According to the study we recently cited, the construction of these hives is largely to blame for these problems. They are not insulated enough, which exposed the bees to colder temperatures than real hives, and the openings are far larger, creating a lower humidity level, which allows the Varroa mite to thrive.