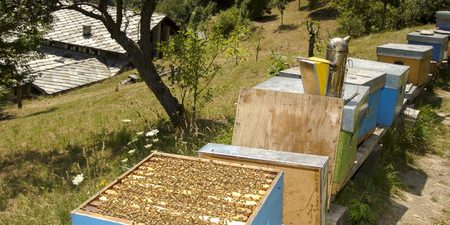 Like many others before them in recent years, a set of beekeepers by the names of Cecelia Cisneros and Christopher Segovia, a mother and a son from Laredo, TX, are contributing to the fight to protect and preserve honeybee populations in their hometown. The duo, who originally started beekeeping as a way of bonding, care for a few beehives at the local Lamar Bruni Vergara Science Center, where Christopher, a tour guide, teaches children about animals. “Originally, I was supposed to go to college in California, so I told [Cecelia], you get me a beehive, and I’ll stay here in Laredo, so I got a beehive,” Christopher said.

By pursuing his interests, Christopher and Cecelia are not only creating memories but also changing how their town views honeybees. Strangely enough, besides varroa mites, wax moths, and other threats, the duo has realized stereotyping of bees is an ongoing issue. “Here in Laredo, there is a misconception that bees are violent, that they’re dangerous. So, more often than not, the city of Laredo kills them or extinguishes them,” Christopher said. “My mom and I will go and rescue them, switch out the queens, and we’ll have a new hive.”

When they are not out saving swarms from an exterminator’s spray, according to Cecelia, this ongoing hobby she and her son have endeavored on together has been very interesting and a great way for the two of them to spend time together. “It’s fun and great for bonding…There can be some tension every now and again, but I love it, and I wouldn’t trade it for anything,” Christopher said as well.

After over a year of working together, not even the threat being stung runs through the duo’s minds anymore – Christopher even claims that after hundreds of strings, they don’t even notice. “We’ve come across Africanized hives, so it was kind of, the bees were chasing us,” Cecilia said, saying their bees are the docile variety. She and Christopher have overcome many obstacles typical of beekeepers, from parasites to weather, and they do not plan on stopping anytime soon.

With the future before them, Christopher and Cecelia plan to take their hobby, improve their beekeeping skills further, and turn it into a full-on vocation. Several local businesses, including restaurants, have taken notice and are keen on buying some of the honey these rescued bees are producing. With that, the mother-son duo plan to sell some for profit. By the end of this year, the two anticipate having 20-50 hives to begin their new enterprise.